Australia: The Worst is Yet to Come 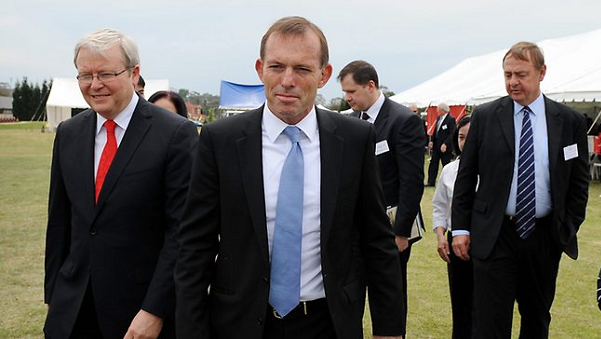 In the aftermath of the Labor Party’s internal demolition of itself, the Australian people are putting their hope in the Opposition, the Liberal-National Party (LNP), and its leader Tony Abbott.  In Australian politics the LNP are supposed to be the conservative party, the word “liberal” in their name being from the older European tradition of liberalism.  This is the view that encourages individual freedom or liberty, and a government that guarantees individual rights and liberties.  While the LNP tends towards liberalism, its legislative programs do not always match the rhetoric.

The forthcoming federal election, September 14, will provide the answer of which party will be in the majority, and who the next Prime Minister will be.

Is there a best way to determine the future outcome of Australian politics?  Australians like gambling, so the bookmaker’s odds on the election might have something to tell us.

And what they tell us is that the odds of Labor winning have come down from about $4.20 to $3.60, while the odds of the LNP win, while still around $1.20, have dropped eight cents in the past week.

If nothing else, this indicates a trend.  And if the trend continues until the scheduled election September 14, the expected romp home for the LNP is at an end.  In fact, they may not be the first past the post at all.

Add to this trend Kevin Rudd’s success at appealing to young people with his Facebook and YouTube presentations, and it might be relatively easy to predict a Labor victory.  Now that’s one prediction I’d like to be wrong, but unless the LNP party can find its way out of the doldrums, it’s in for a political licking.

While Julia Gillard was Prime Minister, Tony Abbott and the LNP had it easy.  She was so unpopular the LNP merely had to wait for the day when voters would have thrown her out of the Lodge.  But the Labor Party took that away.

Now the LNP has a fight on its hands.  A serious fight.

And the tragedy is, neither party has the right moral standard to make a difference.  Kevin Rudd, Australia’s current Prime Minister switched sides on the same-sex-marriage issue earlier this year.  So he is now the first PM in Australia to support same-sex-marriage.

Tony Abbott, a somewhat conservative Catholic and family man does not support same-sex-marriage.  But this is not the bell-weather issue in politics.  Economic management is.  And both Labor and LNP are committed to the idea of government solutions to the economic conditions of Australian citizens.

And that means higher taxes, less wealth for all, and more legislation aimed at controlling Australian commerce.

Ideas certainly do have consequences.