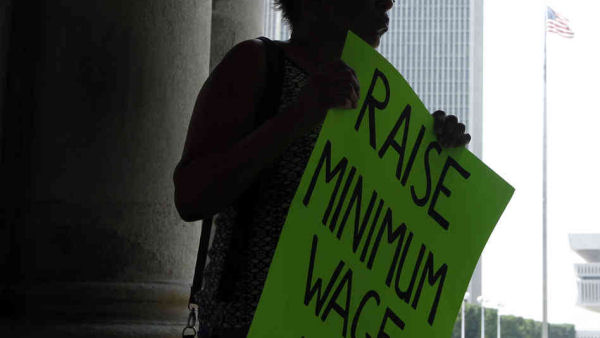 Would you pay more for something than you had to? Nick Hanauer thinks you should. But don’t worry: it’s for your own good.

Hanauer is the founder of a venture capital firm called Second Avenue Partners, and recently published an editorial on Bloomberg.com titled “The Capitalist’s Case for A $15 Minimum Wage”:

“The fundamental law of capitalism is that if workers have no money, businesses have no customers. That’s why the extreme, and widening, wealth gap in our economy presents not just a moral challenge, but an economic one, too. In a capitalist system, rising inequality creates a death spiral of falling demand that ultimately takes everyone down. Low-wage jobs are fast replacing middle-class ones in the U.S. economy… Policy makers debate incremental changes for arresting this vicious cycle. But perhaps the most powerful and elegant antidote is sitting right before us: a spike in the federal minimum wage to $15 an hour.”

Yes, it is a “fundamental law of capitalism” that “if workers have no money, businesses have no customers.” That is precisely why free market economies have been engines for growing a middle class and raising the standard of living for everyone. If we are now seeing the middle class dwindle, this is because of a return to mercantilist interventions in the economy—probably via fiat currencies and the Federal Reserve banking cartels.

But problems hurting the economy need to be fixed, not “compensated for.” Neither punitive taxing nor wage laws are going to correct the damage: they will simply add to it. Specifically, a $15 an hour wage hike will mean immediate layoffs and many businesses going bankrupt.

Imagine a “Minimum Investment Law” that demanded no one invest in a start up less than a certain amount. This would mean that some number of startups (depending on how high the minimum that is set) would never attract investors. Likewise, youth employment is especially hit (as it was by the raising of the minimum wage in 2009), as employers prefer to hire either no one or else more experienced workers at the higher rate.

And if Hanauer’s idea would work, why stop at $15? By his logic the legislature could open the floodgates of prosperity by imposing a $100/hour minimum wage law. To deny the obvious destructiveness of his idea, Hanauer invokes “the research of economists David Card and Alan Krueger.” Their study was flawed and has been refuted. Simply citing one study because you like what it says does not constitute persuasive reasoning.

The lesson here is that just because a person is a successful investor does not mean he knows anything about economics or how to help the economy. Too often, business people proscribing economic fixes believe that the virtues of the market stop at the edge of their own business.