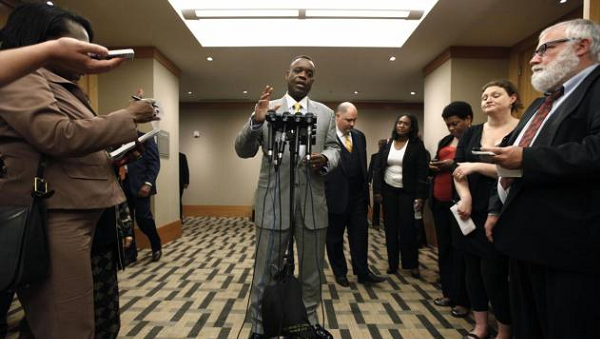 The editors of Bloomberg acknowledge Detroit is facing Armageddon:

“In Detroit, a reckoning is near. A recent report from the city’s emergency manager on its deteriorating finances reads like a municipal adaptation of the Book of Revelation… The budget deficit is nearly $380 million, while long-term liabilities may total more than $17 billion. Detroit’s emergency manager, Kevyn Orr, has even considered selling the city’s art collection.  Orr is now negotiating a reorganization plan with unions, creditors and bond insurers. If those talks fail, Detroit could become the largest city in U.S. history to file for Chapter 9 bankruptcy protection. The unions should strive to make a deal before that happens, even if it means forcing retirees to take substantial pension and benefit cuts.”

Cutting through all the verbiage, they want bondholders to get paid back no matter what, and for the pensioned retirees to take the losses of a bankruptcy. For the retirees who lose their pension benefits, “State taxpayers should recognize that it’s in their best interests to help those retirees out.”

The best argument in the editorial is the math. The debt owed on the bonds is much less than the unfunded liabilities. Since pensioners are going to feel the pain either way, the city might as well leave their credit undamaged. Perhaps they have a point.

But they also moralize that, “those bonds were approved by voters and bought by investors with the understanding that Detroit could raise unlimited tax dollars to meet its obligations. If Orr doesn’t prioritize them, Detroit would be violating the trust that underlies the $3.7 trillion market in municipal debt. The great virtue of that market is that it enables valuable long-term public investment at low interest rates.”

The essential moral point is denuded by the fact that the editors want the state to bail out the pensioners. The state taxpayers never approved either the bonds or the pensions. The moral principles of the Bloomberg editorial board seem rather flexible. The state taxpayers get bled into a supersized cup so that Detroit and other municipalities can continue to take advantage of “low interest rates.”

Those interest rates rested on a lie: “that Detroit could raise unlimited tax dollars to meet its obligations.” Not true. Detroit has already lost a quarter of its population since 2000.

Bailing out pensioners would mean Michigan is likely to have its own budget shortfall crisis. What happens as other cities fail and demand the same deal for their pensioners? The editorial admits a retiree bailout “risks setting a bad precedent.”

No matter how Detroit sorts out its impending bankruptcy, it needs to stay in Detroit. If interest rates need to rise, so be it. They will do so eventually anyway if they kick the crisis down the road.