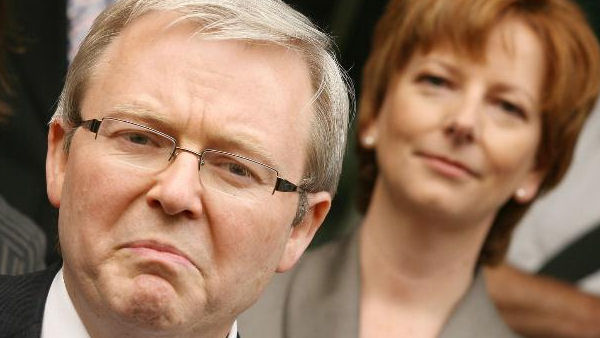 On Wednesday, June 26 2013, Australian politics came to a head. Specifically involving the Labor Party, which is a minority in the Australian Federal Parliament, yet carries the Prime Ministership with the aid of independent members of the house.

Unfortunately, Julia Gillard was not of the same caliber as former British Prime Minister, Margaret Thatcher. In fact, these two ladies are poles apart in their policies. For the one, lowering taxes, balanced budgets, and principles such as a strong work ethic and self-reliance were important. For the other, higher taxes, more national debt, and a government support system that undercut a strong work ethic and self-reliance, governed policy.

On more than one occasion Kevin Rudd and his supporters attempted a comeback, forcing a vote within the Labor Party on its leadership. The last attempt before this one saw Kevin Rudd walk away from the contest. But he waited, and his patience paid off.

With a federal election due in September, the pollsters showed Labor under Julia Gillard would be decimated. They would be “lucky” to get much more than 30% of the vote on Australia’s two-party preferred system. Under Kevin Rudd, the polls showed that Labor could at least get into the mid-forties as a percent of the vote.

So, the Labor Party finally succumbed to what was patently obvious to most Australians. The people did not like the way Julia Gillard obtained the key position, and the Labor Party’s policies under PM Gillard were extraordinarily unpopular. For all the debt expansion to “help” Australians, very few found themselves helped in any meaningful way. Welfare payments to many in need were reduced, not increased, as the current budget blew out beyond the Labor Party’s expectations.

The leader’s seat was vacated for the internal Labor members’ vote. Two contenders, Gillard and Rudd, knowing that whoever lost would resign from politics. It was a high-stake call by Julia Gillard, and she attached the condition, which Rudd accepted. Australians woke on Thursday morning with a new Prime Minister, no Federal Treasurer, no Minister of Education, for example, as about a third of the existing cabinet resigned, refusing to serve in a Cabinet under Rudd’s leadership. But having a non-functioning parliament might be the relief Australians need for a while.

Kevin Rudd has about two months to get the Labor Party united for the election. For a party that appears unable to remove schism within its ranks, he has a near impossible and unenviable task. But an increasing number of Gillard supporters are quitting politics and not standing at the next election. If Labor is to survive and regain office, it has to get rid of its factionalism.

But even with the Liberal-National Party (LNP) lurking in the wings, Australians, should not get too excited about their future. Not yet, anyway.