Companies Come and Go, But Creative Destruction is Forever 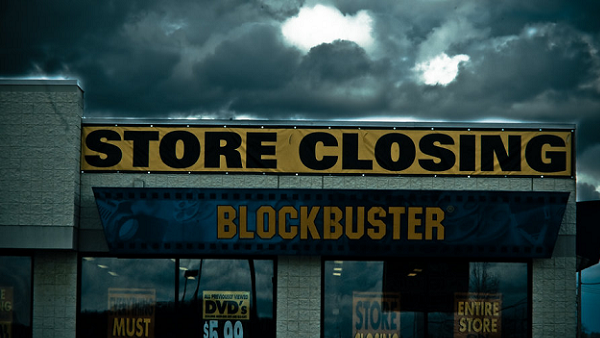 Record companies used to have a business model that created terrific profits. These companies owned the rights to their product, built on the shoulders of creative and talented people, and then controlled the distribution system for that product. Consumers were charged accordingly. As a kid, I spent a great deal of my disposable income on records, cassette tapes, and finally, CDs. That’s because the record companies provided something I wanted.

Now very few people buy plastic tapes, vinyl, or CDs in order to listen to music. What changed? Technology and the internet, of course, as it became possible to obtain the music in an extralegal matter at first, and then completely legal methods prevailed. Napster marked the opening bell, iTunes threw a nasty uppercut, and Pandora and Spotify were the knockout punches.

The exact same phenomenon was also apparent with the videocassette business. Companies like Blockbuster controlled video content, and they controlled the distribution system for their product. Yet even though the same technological forces that doomed record companies were also set to undermine Blockbuster’s business model, that company failed to make the proper adjustments. There used to be 9,000 Blockbuster stores; today, there are about 500.

These changes in the fortunes of large companies demonstrate the raw power of Joseph Schumpeter’s creative destruction. It sometimes appears that companies are poised to dominate their industries forever, but changes in technology, culture and economic conditions can overturn preexisting market arrangements very quickly. Change is great for the nimble and the up and coming; change is terrible for the established status quo.

Which companies are next in line to be undone by technological trends? Cable companies, of course! They are the sole distributor for their product, and they have a near monopoly in their respective markets. And just like price-gouging record companies, or video rental companies that charged exorbitant fees, many people will be happy to turn away from them as ever-improving technologies allow alternatives to proliferate.

Action Investment Point: Identify broad technological trends and then determine which companies will benefit or suffer the most from these trends.