Denial (of Freedom) Is Just a River in Egypt 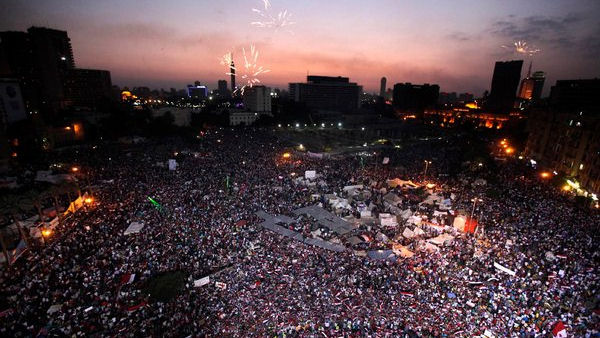 Two years ago the Arab Spring sprung in Egypt. Quasi-western young people tweeted and Facebooked themselves into a revolution. Crowds gathered in Tahrir Square wearing tee-shirts with logos of hip Western companies like Google printed on them and carrying English language protest signs. CNN breathlessly reported that Tahrir means ‘freedom’ and experts told us that this was a chance for a re-set with the Arab street, a chance to show the teeming oppressed masses of the world that, this time at long last, we were on their side. I appeared as a guest on Maria Bartaromo’s show on CNBC and debated with a young tech entrepreneur who was giddy with optimism. “They can download any constitution they want.” he said. “Yes, but do they have the wisdom to know the best one to download?” I replied.

Not long after that I was a guest on Neil Cavuto’s show on Fox News. Shortly before I came on the air, Obama held a press event in which he announced that the US wanted Mubarak to go. Neal called it the velvet boot. I said, now whatever happens, whatever blood is shed, it’s on our hands too.

And now we have the week of Egyptian reality. The regime lasted one year. The Arab Street hates us still. A hostile Islamist government is in power and there is violence in the streets. Perhaps those CNN Arabic experts can let us know that Tahrir Square does not mean Freedom Square, it means Liberation Square, as in yet another of that long line of national liberation movements which kicked out the evil foreign oppressors, nationalized their property, promised heaven on earth and delivered something closer to hell on earth. Tahrir Square’s significance is associated with Egypt rejecting all things British: Christianity, common law, capitalism. Only one Western institution was kept, the military, because only that one was truly essential to the ruling class.

And, we see now that it is the only thing standing. The country is still a Muslim Brotherhood country and as such it is ungovernable in any reasonable sense of a free and modern nation. The Christian minority is more oppressed than ever. The modern minority (and its Google t-shirts) really only has one weapon: the ability to look good on CNN. But elections will mean Sharia for a long time. They’re not ready to be us, and any investors who bumbled or were inspired by either the conservative or liberal version of the ‘freedom agenda’ into believing that Egypt was a good bet are now staring reality square in the face in the form of collapsing equity values and currency exchange rates along with a collapsing political order.