Detroit is the Canary in the Coal Mine for Munies 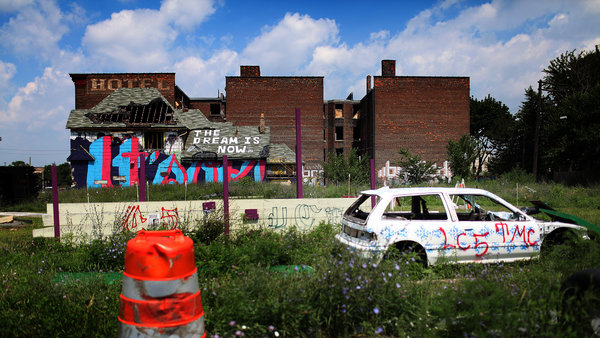 I have pleasant memories of Detroit.  For almost fifty years, I have been making the summer drive to the Mackinaw City area of Michigan near the Upper Peninsula.  Until I was a teenager, we used to pass through Detroit on the way and see my great uncle Oliver.  He was one of those guys who built the city, and rebuilt antique cars in his garage.  He was a man who could do anything with his hands.  I don’t think there are people like him in Detroit anymore.

While Detroit is worse than most, many of our cities are dying.  They are suffocating under a wet blanket of anti-business and tax-and-spend policies that are driving revenue producing entrepreneurs away in droves.  What is left is a cadre of public employee unions that have lived high on the hog for decades and will do and say anything to keep the gravy flowing.

I have written extensively about the coming interest rate shock due to our overwhelming sovereign debt as a nation.  Detroit is the canary in the coal mine for another mountain of crushing debt: the debt of our cities.  Meredith Whitney was spot on, just a couple years early.

While it is bad enough that progressive policies bought votes and other bags of goodies until the lights went out, what is worse is the destruction of the education system and the creation of a lost generation.  Forty percent of Detroit’s residents can’t read.  Even if a business wanted to move there, where would they find a sufficient workforce?

And now, let’s get to the point.  Do you own any municipal bonds?  If you do, then dig out the prospectus and start reading.  Don’t assume they’re perfectly safe: do your homework. Scrutinize them like any other investment. What is the revenue source behind the bond?  Is it a revenue or a general obligation bond?  Are there loopholes so that the covenants can be broken?  What is the reputation of the government entity issuing the bond?  Does it look like they have the political will to pay back the principal?  Or are they like Detroit, kicking the can down the road and constantly looking for another pot of money to loot?

Here’s my rule of thumb.  If the bond is issued by a city run by a progressive administration, sell it.  Insurance doesn’t matter, it won’t be worth anything when hundreds of municipalities default.  If you need tax free income, buy bonds that are issued by responsible entities with a track record of good governance. It shouldn’t be too hard to distinguish between the two.

Oh, and here’s another tip.  If you are looking for cheap farmland, look in Detroit.  Call it reverse creative destruction, I predict Detroit will go back to where it came from.