Do Stock Bubbles Cause Zombies? 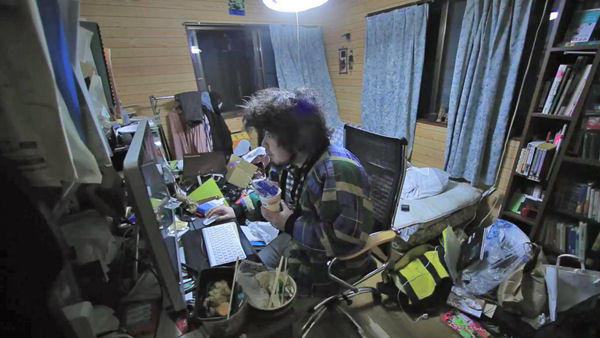 Japan appears to be suffering from a plague. Suddenly over the past decades many tens of young men and women (perhaps mostly men) have become reclusive hermits. Some reportedly sleep all day and stay out at night. They refuse to leave their rooms. There are reports, despite the lethargy, of violent outbursts against parents. Horrible crimes have been reported. And it may be spreading to other nations.

The hikikomori are among us.

“Symptoms vary between patients. For some, violent outbursts alternate with infantile behavior such as pawing at the mother’s body. Other patients might be obsessive, paranoid and depressed… it is thought the numbers of hikikomori have increased. A conservative estimate of the number of people now affected is 200,000, but a 2010 survey for the Japanese Cabinet Office came back with a much higher figure – 700,000… The average age of hikikomori also seems to have risen over the last two decades. Before it was 21 – now it is 32.”

While this situation seems unique to Japan, something like it may be spreading to other countries.  One expert claims to have seen the same problem in Korea and Italy. He also heard of it in the UK. “After a 2002 BBC documentary, Saito received a flurry of emails from British parents who said their children were in a similar condition.”

The common feature is a central bank stimulating growth and a government that is considered responsible for the economy. Thus, for a time, there is easy money and easy credit. Everyone is taught that if they simply get an education, they can go have a full-time job and a comfortable life. Suddenly that world no longer exists.

“Andy Furlong, an academic at the University of Glasgow specializing in the transition from education to work, connects the growth of the hikikomori phenomenon with the popping of the 1980s “bubble economy” and the onset of Japan’s recession of the 1990s. It was at this point that the conveyor belt of good school grades leading to good university places leading to jobs-for-life broke down. A generation of Japanese were faced with the insecurity of short-term, part-time work. And it came with stigma, not sympathy.”

At one time no one thought there was any one sure ladder of success and so they worked hard and looked to find the right fit. After a time of easy money in a bubble economy, people seem to have forgotten how to survive. The crash is akin to releasing a creature, raised in captivity, back into the wild.

While this phenomenon is extreme, it may show us the fear and paralysis felt by many more. One reason why the US government is able to report lower than expected unemployment numbers is precisely because so many have given up and stopped looking for work (and thus are not counted as unemployed).  In addition to all the other economic headwinds, we are dealing with a population raised to wait on government to provide easy growth.