Egypt In the Maelstrom 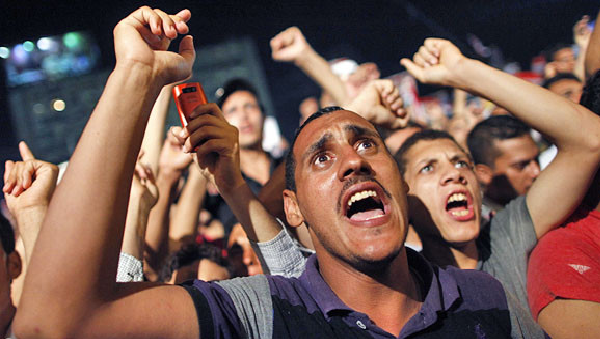 The world woke up to the distressing news that the Egyptian Army fired upon Muslim Brotherhood protesters, killing 55 people as of last count.

The protesters were shot while praying at dawn and protesting the detainment of ex-President Morsi. After that, the facts get fuzzy. People on the scene implicate the military with the shooting. On the other hand, other sources state the there were two armed assailants that precipitated the conflict. Furthermore, it seems implausible that the Egyptian military itself would engage in a massacre unilaterally on innocent protestors.

Regardless of the actual events, it is clear that the situation in Egypt has descended to a point where it will be very difficult to recover.

This tragedy can be placed to some extent on the Muslim Brotherhood themselves. They had the levers of power for the first time in 80 years after last year’s election, and they blew it. Ex-President Morsi sought to silence both the Army and the judiciary at the same time, and sought to recreate the Mubarak regime’s dominance, albeit with a different ideology. Furthermore, his economic policies were counter-productive. While the very recent coup is not how democracy works, millions marched against the Morsi regime, and the military felt that it had no choice but to kick the Muslim Brotherhood out of power.

In addition, the economic policies of the United States have proved to be disastrous for Egypt. Mubarak’s rule was predicated to a great extent on keeping foodstuffs cheap. But the quantitative easing of the Federal Reserve has caused inflation to spread to developing nations first, and culminated with the revolutionary events of 2011. Clearly, constructive economic policies would help turn the tide, as Ray Keating’s recent post points out.

But before there can be any prosperity, there must be security and the rule of law, and only the Egyptians as a whole can provide these things. A government is required that is consensus-driven, competent and adheres to the same rules that apply to everyone else.

Even as of last night, I believed that Egypt’s deep cultural roots and civil society would help the country out of the current mess. Now I am not so sure. The one remaining institution with wide support, the Army, has now been tarnished, perhaps permanently. All of the remaining actors (the Islamists, the ex-Mubarak supports, the secularists) have been radicalized, and future cooperation is less likely than ever.

There are two paths for Egypt to take at the moment: slowly grind through the coming weeks and months of unrest, and build up the country’s institutions with an interim government that keeps the lid on multiple boiling resentments until elections are called.

The second path is nothing short of civil war, in one of the most important strategic locations in the world and the most populous country in the Middle East. This could send the whole region into a downward spiral and cause profound economic and political chaos worldwide.

I still hold out hope for Egypt’s future; unfortunately, that hope is diminishing in supply.