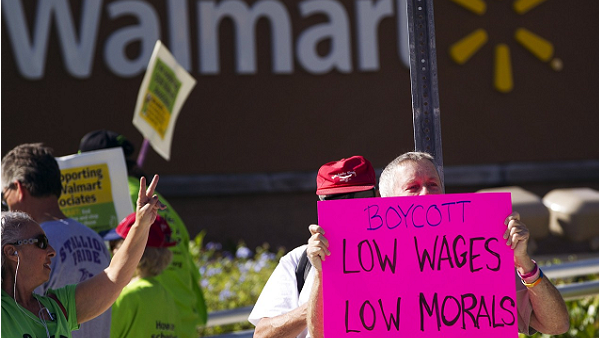 The city government of Washington DC is about to raise the minimum wage to $12.50 an hour, though the mayor is threatening to veto it. Wal-Mart officials have said they will pull out of three new stores that were to be built within DC.

“Because Walmart does not want to pay all workers a minimum pay of $12.50/hour, it is likely they are lying when they claim to pay their workers an average of $12.87 an hour.”

That is nonsense. The fact that Jamieson believes he can get away with it indicates that there is an audience that hates Wal-Mart without reason.

If Walmart started everyone at $12.50 an hour then their average pay would far exceed $12.87. Jamieson admits these full-time hourly employees include “department managers who are paid hourly and probably earn a good deal more than cashiers, stockers, and sales associates.” So by Jamieson’s own admission the $12.50 minimum pay would push up all their salaries, probably far above the $12.87 average.

This is a sin?

Jamieson’s finds ways to make accusations stick even while acknowledging they are not true. Such as:

Then Wal-Mart did not mislead anyone. Again, Jamieson’s attack contains no logic but informs us of a group of people who want to hate and don’t need a reason.

Talk about “a living wage” is the “misleading picture” here. Jamieson fails to note Wal-Mart’s smaller competition will be exempt from the $12.50 minimum wage law. It is just fine for smaller stores to continue to pay their employees low wages that no one can live on. Only Walmart and other retail giants are singled out for punishment.

In Jamieson’s world, everything Wal-Mart does is evil. The fact they don’t turn over all their documentation to him so he can examine all their financial secrets is some kind of sinister plot.

The fact that Jamieson has a funded platform for this kind of anti-market illogic is a warning to people who want to invest in growing thriving businesses. Putting your money in visible, prosperous businesses can be risky. Big government hates big business (outside its own crony network). Under a regime premised on envy, it is wiser to try to find smaller and less visible prosperous businesses.