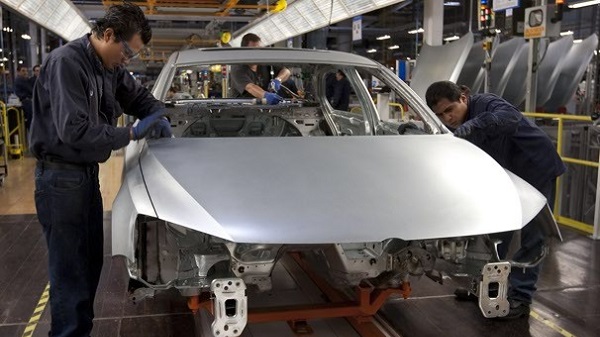 Many Mexicans are finding new levels of prosperity through work and savings and capital improvements. Yet the Washington Post had to report this under this negative headline: With Mexican Auto Manufacturing Boom, New Worries.

“The average pay at his plant, Rabago said, is $3.20 an hour, but he said wage comparisons to U.S. workers miss a Mexican reality. ‘When I came here 20 years ago, people didn’t even have indoor plumbing,’ he said. ‘Now they have pickup trucks, satellite TV, and send their kids to universities.’ Overall, Mexico is making nearly 3 million vehicles a year, with output expected to increase 38 percent by 2016…”

The Mexican auto industry is growing and contributing to the expansion of a Mexican middle class. “As Mexico cranks out record numbers of vehicles and attracts billions in new investment, Mexican autoworkers are increasingly able to match the skill and productivity of their U.S. counterparts — and at a fraction of the wages.”

That last point explains the WaPo’s negative outlook. American workers might be out of jobs as this trend continues. The story finds people who give assurances that both US and Mexican automotive jobs will grow. But are such prospects the only way to stop “worrying” about another country’s prosperity?

The entire perspective of this story not only tempts Americans to resent Mexicans for their success (even though it is a fraction of the American standard of living), but it also smears investors as if they are hurting America by finding productive uses for money. If Mexico starts making less expensive automobiles that will mean more Americans will be able to afford them. Those who are already buying such vehicles will have more money left over to use for other purposes—purposes that will probably stimulate new job creation. Furthermore, the Mexicans will also have more money. Who’s to say that US producers won’t find new markets in the Mexican middle class?

Also, as Mexican productivity improves the value of their currency will increase relative to other currencies. Assuming they don’t inflate their currency to create an artificially poor export-driven economy, then the Mexicans will find that other goods are cheaper from foreign countries.

Furthermore, as we see both in the hysteria about illegal immigration and the stories of drug cartels, a perpetually impoverished neighbor to the South has detrimental consequences for the United States.

Yes, workers can and are displaced for a time by these kinds of changes, but attempting to stop economic movement and freeze time never succeeds. It just creates more problems for everyone. We should be reporting the economic good news of other countries as good news for our own country.