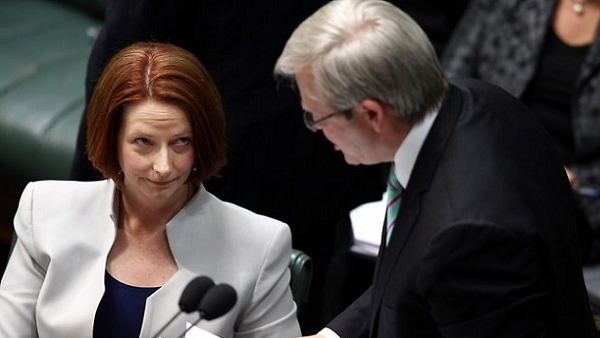 It’s been a a week since the Australian Labor Party dumped Prime Minister Julia Gillard as party leader and replaced her with Kevin Rudd. And already the polls are speaking.

Kevin Rudd is suddenly showing as the preferred Prime Minister versus Liberal-National Party (LNP) leader Tony Abbott, 51% ahead of Abbott’s 49%.  And that was the best result.  Other polls have Abbott as low as the mid-thirties.

While politicians will tell you they are not concerned about polls, someone obviously is.  Enough to keep the pollsters in business.  If the politicians are not swayed by the polls, perhaps the voters are.  No one likes to back a loser.

For example, I can buy quality clothes in the USA and air-freight them to Australia cheaper than I can buy similar quality in Australia.  Even though the clothing may have been made in the same place: Honduras, Philippines, or even Vietnam.  In a recent government enquiry against Microsoft and Adobe, whose products are more expensive in Australia than they are in, say, the USA, it became evident that these companies charged higher prices “because they could.”  By refusing to ship to Australia from USA online purchase sites, Australians have no choice but to pay higher prices.  Or go without.

New home prices in the capital cities of all the states start at around $350-400,000.  In a city such as Sydney, it is higher, and first home buyers are pretty much excluded from the market place unless they have an extraordinary income level, or have family wealth.

This helps to make it rather obvious that Australia’s “wealth” is inherently tied up with its physical resources – iron ore and coal, especially.  But even these industries are not immune to global economic events.

And so, Australians who invest watch with great interest what is going on in China, USA, and Europe.  Given the inability of economists on public payroll in these places to “solve” the economic “crisis,” it is certain that we live in interesting times.

But the question remains, how does a person protect his assets in “interesting times”?  And can either Labor or LNP lead Australia out of the global economic crisis, or will they instead bury Australians in a mass of government and private debt?  It’s a race between the two parties.  And they both appear to be firmly headed in the same direction.