ObamaCare Forcing Businesses to Close Up Shop, Hitting the Economy 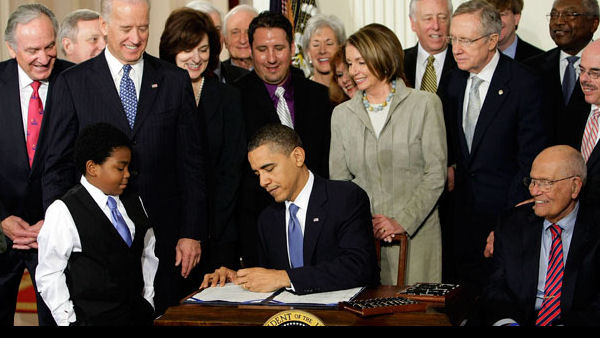 This four-year economic recovery has been one of the worst on record, with real GDP growth averaging a mere 2.1 percent. Keep in mind that during a recovery, the U.S. economy should be expanding at better than 4 percent on average.

Looking ahead, however, there seems to be some rising optimism about growth stepping up in 2014, at least at the Federal Reserve. The Bernanke Fed revised its growth projection up a bit for next year, now expecting growth between 3.0 percent and 3.5 percent, with unemployment dropping to between 6.5 percent and 6.8 percent by the end of next year.

Even if that were to come true, it would still speak of a badly under-performing recovery. But is there any solid basis for optimism on future growth?

Well, if you believe that policy has nothing to do with how the economy performs, then faster economic growth seems to be an assumption based on little more than the idea that, “Hey, we’re long overdue.”

But if one recognizes that federal tax, regulatory, spending and monetary policies have worked against economic growth by raising costs and creating uncertainty, then little reason exists to expect consistent, robust economic growth to kick in.

Key factors working against growth in 2014 are ObamaCare’s two big mandates. An individual health insurance mandate requires individuals to obtain “acceptable,” as defined by the government, health insurance coverage or pay a penalty, which would reach as high as 2.5 percent of income in 2016. As for businesses, employers with 50 or more workers that don’t offer health coverage will face a $2,000 penalty annually for each full‐time employee over the first 30 as long as at least one employee receives a health insurance subsidy.

I’ve spoken to various small business groups in recent months, and their stories regarding uncertainties and costs regarding ObamaCare line up with more widely reported scenarios, as well as what one would expect based on basic understandings of business and economics.

Recently, for example, the owner of a retail food establishment with 110 employees told the gathering that he could not afford to offer health care coverage, nor could he afford the annual penalty. He sees no other option than shutting down after 30 years in business.

This and similarly harsh realities promise to hit many businesses, and therefore, the overall economy and job creation in 2014.

For good measure, don’t forget to throw in federal community rating (cannot price based on serious health issues), guaranteed issue (all must be accepted) and coverage mandates on health insurers, as well as state-based health insurance exchanges that will serve as vehicles for government to regulate and gain more control over health insurance. Oh yes, and a new levy will be imposed on health insurers in 2014. All points to high health insurance costs, and damage to the economy.

ObamaCare in 2014 promises to serve as a major obstacle to stronger economic growth.