It seemed a sure thing. Turkey was the great exception to the dreary tale of economically dysfunctional Muslim countries. A candidate for membership in the European Union, a long-time member of NATO, a “secular” Islamic state, all spoke in Turkey’s favor as far as geopolitical factors are concerned.

Economically, the fundamentals seemed sound. Growth had recovered from a slump in 2009, the government debt was only in the 40%-plus area of GDP, and the currency was looking strong against the euro, which at the end of 2012 was on a clear weakening trend. 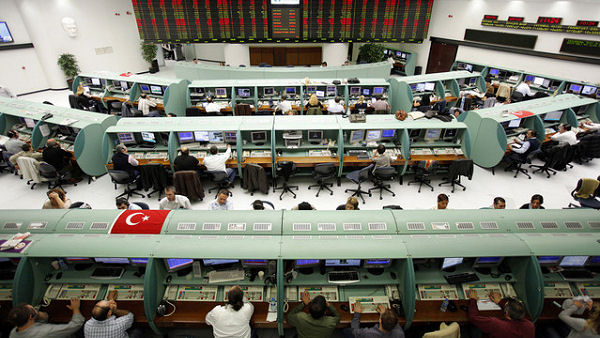 For somebody looking to invest euros, Turkish government CDs certainly looked like a sure thing. Not only was the lira appreciating against the euro, but the interest rate being offered on a three-month CD was 6.15%. So of course I took the plunge.

The new Alvarado strategy was initiated on November 23rd 2012, roughly where the first green line appears on the accompanying graph, which shows the lira/euro exchange rate. And for some time, it appeared to be a golden move. 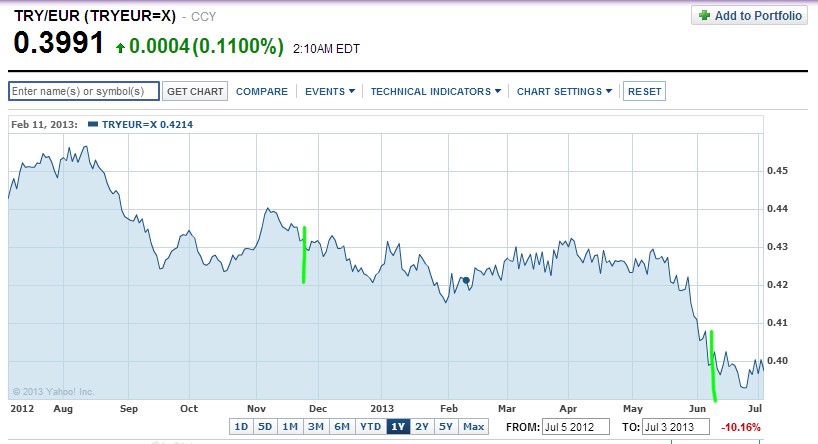 But never underestimate the ability of politicians to throw a monkey wrench in economic fundamentals. We all knew about the conflicts between the Islamicist-leaning civilian government and the secularist-leaning military. But I didn’t realize how much resentment had been building up against the government among the grass-roots civilian population. This resentment exploded towards the end of May, resulting in a collapse of the lira against the euro.

Of course, this also threw a monkey wrench in my rosy scenario for investment returns. My final CD expired at the beginning of June, roughly where the second green line appears on the chart. If only those riots had started a couple of weeks later, I’d have had a tidy sum accumulated. As it stands, I pretty much broke even, for which I am thankful.

The moral of the story is, investing in emerging markets comes with risks all their own, that are often unforeseeable. Caveat emptor. But what is one to do, in the context of negative real interest rates in the developed countries?