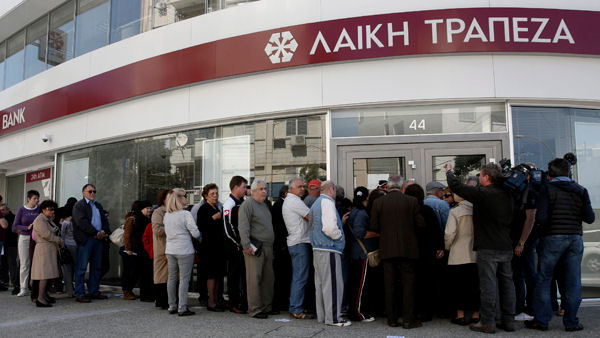 ZeroHedge caught my eye with this post reporting that there are economic consequences to legalized bank robbery.

“Another month, another update on the inefficiency of Cypriot capital controls, where following the latest release by the central bank on the May level of deposits in the banking system, we learn that total cash holdings in Cyprus banks dropped by another EUR 1.4 billion in May to EUR55.9 billion, and 23% lower from the same month last year.”

That should surprise no one. If bank robberies were common, then we would see fewer people using banks. And when the government, enmeshed with a foreign network governing a conglomerate of nations, is the bank robber, it still has the same effect.

What I want to know is what else did anyone expect to happen? Remember, the EU and the IMF initially demanded a “one-time” levy of 6.7% for deposits up to 100,000 euros and 9.9% for all deposits above that amount, on all domestic bank accounts. So even the insured deposits were going to take a hit. Did the geniuses at the EU and the IMF not foresee that this would irreversibly undermine the use of banking? How would such a lack of confidence in the banking system help Cyprus recover?

Happily for many Cypriots, their government pushed back to some extent so that the bank robbery levy only affected those with deposits large enough to not be entirely insured. But the lengthy bank holiday, the fact that anyone’s money was taken at all, and widespread knowledge that the powers that be had wanted to take from more people, all must have severely shaken anyone’s faith that their money was safe in a bank. Frankly, I’m surprised deposits are only down by almost a quarter from this time last year.

Since the EU is making Cypress the model for how they are going to deal with their next banking crisis, it seems likely that many people will try to keep more cash out of the banks so that they don’t have to see that money disappear. Is that what the Eurocrats want?

If they hope to save the banking system I would think they should find ways to make people feel like their money is secure rather than at risk in banks.