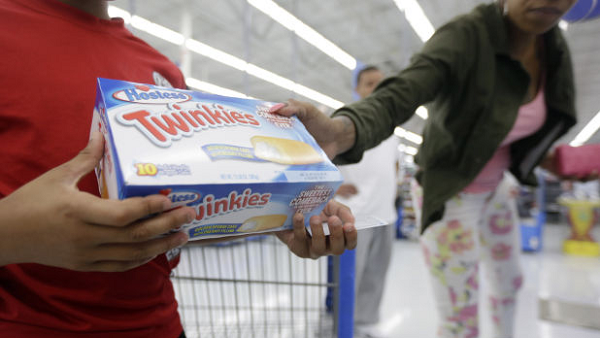 Twinkies – along with my personal favorite, Hostess CupCakes – make their return to store shelves today. Call it the new Twinkie-nomics.

What’s the key economics/business lesson to be taken away from the resurrection of these tasty snacks from the old Hostess that went in liquidation last year? The long death of labor unions – and the demise of heavily unionized firms and industries – continues. And that’s good news for consumers and, in the long run, for workers.

In effect, labor unions have fallen to inconsequential status in the private sector, while just holding their own in the public sector (falling from 37.0 percent in 2011 to 35.9 percent in 2012, with the range since the late seventies being 35.7 percent to 38.7 percent).

The old Hostess was heavily unionized, which resulted in arcane, costly, noncompetitive operations. The new Hostess Brands, LLC, owned by two private equity firms, Metropoulos & Co. and Apollo Global Management, is focused on innovation, improved efficiency and expanded distribution, with a much-leaner, and non-unionized, workforce, as noted by a July 9 report in The Wall Street Journal. The new Hostess has chance, while the previous Hostess struggled, falling into bankruptcy twice and finally being liquidated in the face of labor union unwillingness to bend to economic realities.

While pro-labor union rhetoric often sounds nice, like “protecting workers’ rights,” it must be understood that the primary purpose of labor unions is to maximize pay and benefits for its members, while minimizing their members’ work and productivity. In the distant past, when some workers could count on lifetime employment in industries facing little competition or artificially insulated from competition, this held appeal to many workers.

But that’s certainly not the twenty-first century economy. Indeed, far from it, and most workers generally get it. Individuals looking to get ahead realize that they need to work hard, and improve their skills and productivity. Therefore, they want little to do with the labor unions that work against those needs. That’s real-world Twinkie-nomics.