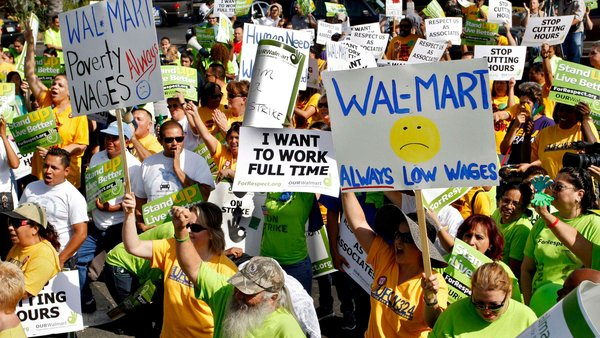 And quite a few, in this case.  It’s just one glaring example of how this plays out nationwide.

According to this story, Wal-Mart is set to cancel the building of three new stores in the DC area if the Democrat-controlled legislators follow through with their plan to raise minimum wage to $12.50 an hour, a more than four-dollars an hour increase from the current minimum.  Three other Wal-Mart stores, already under construction in the area, are also in jeopardy.

Adding to the insanity, the law only applies to big stores, like Wal-Mart.  It’s more of the Democrats’ belief that large companies are the rich uncle who refuses to share.  So the new law is destined to eliminate many jobs at once – around 600 per store in the case of Wal-Mart.  This has one council member frustrated as she notes unemployment is rather high in her ward.  The council member?  Yvette Alexander, a far-left Democrat who said a few months ago she had “concerns” about the massive wage increase.

These stories seem to have forgotten, Yvette Alexander was one of the original sponsors of the bill earlier this year.  Oh, it’s all fun and games until your voter gets hurt.  Liberals like Alexander are suddenly getting a lesson on basic economics: Money doesn’t grow on trees.  Even big trees.

Also not noted in the story, it will kill buying power in the area as Wal-Mart stores regularly keep prices down.

As for the rest of you, join me in encouraging Wal-Mart to stick to their guns.  As unemployed voters stare at big empty lots that pay $12.50 an hour for jobs that don’t exists, the next town might be grateful.  And maybe just a few people in Alexander’s ward will vote differently.