Who Wants To Buy A $20 Happy Meal? More Nonsense About A “Living Wage” 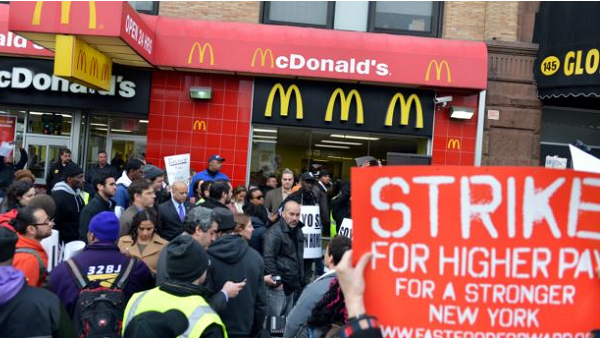 McDonald’s is under fire from a few people in the media for their website design which helps employees use budgeting to get ahead financially. The critics are up in arms that the budget expects employees to work a second job. That is just reality. A productive response would be to demand an end to the forty-hour work week limitation. But instead, many think this justifies a renew call for a hike in the minimum wage law.

“McDonald’s may have inadvertently triggered more support for a movement that has so far only had weak political momentum — to raise the minimum wage. ‘[The budget] shows that what they’re paying is something you can’t live on — that people have to have two jobs, and much higher wages in order to support themselves,’ says Lawrence Mishel, president of the Economic Policy Institute and a labor-market economist. ‘They demonstrated, inadvertently, that they don’t pay a living wage.’”

What is incredible about all this talk is that the talkers assume that McDonald’s is a permanent force in the universe that will always be there no matter how much money they must bleed every month for their workforce.

McDonald’s is about to release earnings (on July 22) and it is questionable what profit they can show. “McDonald’s profitability is getting hurt due to excessive reliance on the less expensive value meals.” This goes back to facts that Mish pointed out in October of 2012. McDonald’s attempted to get rid of the dollar menu. They failed. Consumers were not willing to pay the slightly higher prices. The Wall Street Journal said it all: “Amid Falling Profit, McDonald’s to Revisit ‘Dollar Menu.’” If McDonald’s can’t raise the price of a McDouble by twenty-one cents, why the confidence it can support a higher wage for workers?

Additionally, after arguing for an increase in the minimum wage, Shin says it is not sufficient: “But is $10 an hour even enough? Many fast-food workers say no — and that the McDonald’s budget proves it.” So now we are supposed to get “a living wage” from the fast food industry.

Unless consumers are willing to pay twenty dollars for a happy meal and fifteen for a Big Mac, there is no way to support a “living wage.” It isn’t about what McDonald’s wants; it is about what consumers demand.

I rarely buy clothes at Walmart because I can get better deal at Good Will. I know from the popularity of a gratuitously vulgar rap song that many share my preference for second hand goods. Walmart cannot afford to raise their prices with that kind of competition.

It isn’t about corporations; it is about consumers. We are in control. We don’t care to impoverish ourselves to raise wages in a select industry. We simply want low prices. Any corporation that won’t give consumers what we want faces swift obliteration.