Can Wal-Mart Re-Educate Its Enemies? Perhaps, But Not Likely 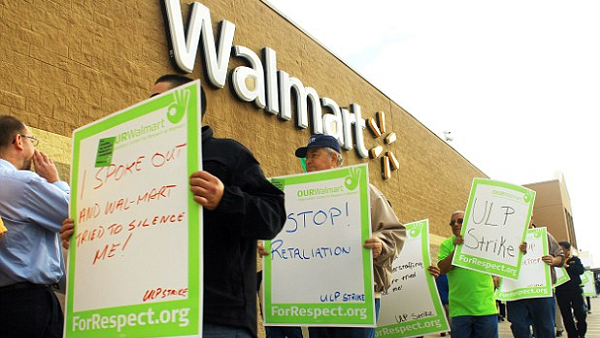 Call this a mustard seed, perhaps, but when a politician also happens to own property he needs to develop and lease, he can do the right thing about Wal-Mart. Bloomberg reports:

“Chicago Alderman Anthony Beale says he will be celebrating this fall when a Wal-Mart SuperCenter opens in his South Side neighborhood, bringing 400 jobs and an $8.75-an-hour starting wage. It’s a victory heavy with contradictions for Beale, who in 2006 voted to force big retailers to pay $10 an hour and benefits. The “living-wage” measure was vetoed by then-Mayor Richard Daley, opening the city’s doors to Wal-Mart Stores Inc. Last week, the company opened its ninth store in Chicago, where it employs about 2,000. ‘These are not jobs where you can pay a mortgage or raise a family,’ Beale said. ‘I am a supporter of a living wage. But without Wal-Mart, my site would still be vacant.’”

I recently pointed to the Wal-Mart “living wage” war in Washington DC, and concluded that investing in a company that has such anti-market enemies can be risky.

Is there any chance that a “high value target” like Wal-Mart can change the hearts and minds of its enemies?

Some might find hope in the story of Wal-Mart in the Chicago area. After all, it does mention good news about Wal-Mart’s investment:

“From Chicago, Beale said Wal-Mart, with its new construction, produce aisles and ‘starter jobs,’ has made his Pullman neighborhood more attractive to other employers even before it opens. On July 16, Method Products Inc., a maker of soaps and cleaning liquids, said it would open its first U.S. factory there and hire 100 workers. ‘It’s really opened up the door for all kinds of jobs to start coming back into the area,’ Beale said, even as he stands by his 2006 vote. ‘At the time it was the right thing to do,’ he said. ‘Sometimes we have to make tough decisions.’”

But the negatives far outweigh the positives. Aside from Beale’s testimony for Wal-Mart being so half-hearted, most of the article itself is negative, never even alluding to the way a mandatory higher wage could kill investment. It quotes many others who insist on treating all corporations as if they are baskets of money being improperly withheld from unskilled labor who deserve it because they need it.

This is not an article that teaches readers to learn sound economics from reality. It is aimed at immunizing readers against reality. If I wanted to build a business of any kind, and had a choice of where to locate, I would want to establish it far away from such a resentful workforce.

Wal-Mart will need to do a lot more educating before they can hope for change.