Our Ruling Class Cannot Hold the Eurozone Together Indefinitely 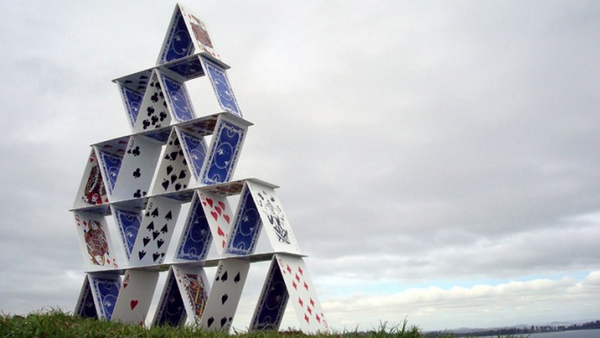 We live in a house of cards balanced by the shoddy magic of sorcerers’ apprentices. Contemporary Euro-America elites know not what they do. “Stabilization” seems to be their paramount objective. But all of us — investors like everyone else — understand instinctively that we are living at the end of an era, that our generation’s social, political, economic equilibria are unsustainable. Like sorcerers’ apprentices, our rulers pull levers and proclaim programs that reflect their identities. But they lack understanding of our world or any grip on events, any of which can collapse the house of cards.  Therefore all of us are obliged to look at events themselves to understand what they are doing to those equilibria.

This blog offers reflections on events that press on those equilibria, that press on that fragile structure, that show the real effects our ruling class’ efforts at extending our pleasant age, kicking a bit further down the road the day of reckoning.

By way of example: No one could have imagined, a generation ago, that investors should be taking note of an Italian government’s attempt to subsidize the hiring of a small fraction of the country’s unemployed youth. But Prime Minister Enrico Letta is proposing just that, hoping to use it somehow to convince other European governments to give Italy some more money to pay its ever-increasing debts, which it is having to service at rising rates even as the economy continues to spiral downward. All know that this spiral cannot long continue before a public revolt will force Italy out of the Euro.

The Euro’s prospective death has been haunting the world economy for half a decade. There have been countless efforts to stave it off. There will be more. One of these days, one won’t work.