Is There a PIIG in Germany’s Parlor?

“It is a truth universally acknowledged that a single country in possession of a current account surplus must be in need of an export market.” With apologies to Jane Austen, of course: the sentiment thus expressed actually is anything but universally acknowledged. In fact, it flies in the face of received wisdom. We are accustomed to thinking of countries running current account surpluses as generating these surpluses by dint of superior industry, frugality, in short, superior economic character. 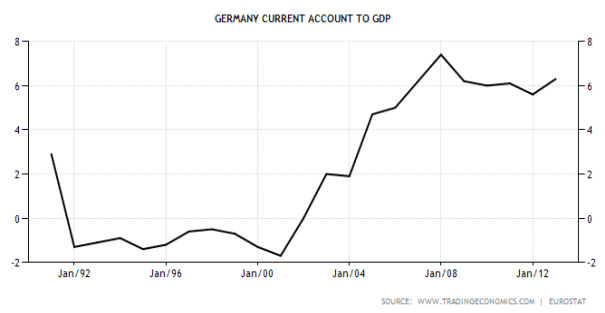 It has been running current account surpluses ranging from 2% to 7½% of GDP since 2001. The popular view is that such surpluses result from thrift or productivity. Let’s assume that’s the case. Given floating exchange rates, the current account surplus should result in an appreciating exchange rate, so that the surplus would result in more expensive exports and cheaper imports. This would then bring the current account back into equilibrium with trading partners; trade “imbalances” would automatically adjust.

But that hasn’t happened with Germany. The current account surpluses have been persistent, and persistently high. That absence of an equilibrating effect is due to the fact that the German currency does not float. Rather, it is linked to the other currencies of the European Monetary System who share a common currency, the euro.

Once upon a time there was a mechanism to bring about equilibrium, even between countries that shared a common currency. This was the “automatic mechanism,” the gold standard of the late 19th century. That mechanism (as I explain in my book Follow the Money) brought about an equilibrium through gold flows. In the country experiencing a current account surplus, gold would flow inward; and in the country experiencing a deficit, gold would flow outward. Thanks to the banking system, this in turn led to expansion in the surplus country, contraction in the deficit country. The boom country, experiencing a rise in prices, would thus import more and export less, while the depressed country, where prices were falling, would begin exporting over importing. And so the two economies would come back into some sort of equilibrium.

Nowadays, of course, there is no gold-standard automatic mechanism: there are no gold flows to do the equilibrating. So Germany’s current account remains in surplus, and its trading partners, chiefly the countries of southern Europe which likewise share the euro, remain in deficit. These countries are collectively known as the PIIGS, an acronym for Portugal, Ireland, Italy, Greece, and Spain. (Of course, Ireland is not in Southern Europe, but functionally it belongs in this group.)

The deficits being run by the PIIGS form the reverse image to Germany’s surpluses, as the following graphs indicate. Each graph shows Germany’s current account balance (surplus or deficit as percentage of GDP) together with each of the PIIGS (source: tradingeconomics.com):

Take another look at those graphs: prior to 2001 and the introduction of the euro, it was Germany that was running current account deficits! The PIIGS, for their part, ran surpluses or modest deficits. The change came about with the introduction of the euro. The euro was set at exchange rates that favored Germany’s economy and disfavored those of the PIIGS. Essentially, Germany was set too low while the PIIGS were set too high.

So then, thrift or economic virtue might explain Germany’s initial current account surplus, but it is the euro that has kept the system from coming into equilibrium, thus perpetuating those surpluses. The euro also has essentially bankrupted the PIIGS, who paid for their deficits by going into massive debt.

Persistent current account surpluses are not a sign of thrift but of dysfunctional exchange rates, not allowed to perform their equilibrating function. That, of course, is nothing new. But it needs to be recognized.