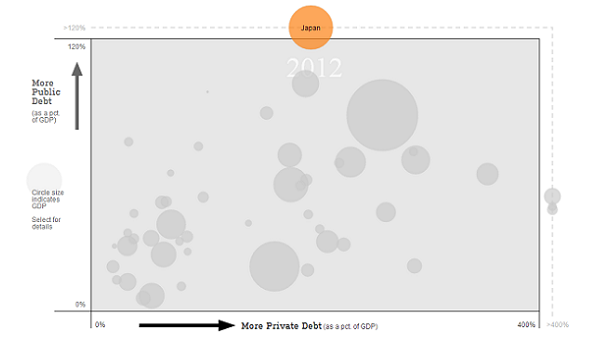 The inflation outlook is the key to gold’s prospects. Everyone looks to central-bank policy, whether for interest rates or direct liquidity expansion via quantitative easing. But if that were the determining factor, we’d have had rampant inflation for quite some time already. Jerry Bowyer discussed this at about this time last year. His conclusion was that, even though inflation had not yet materialized, it is in the offing, precisely because growth isn’t: “In this policy environment, another boom is unlikely, and therefore in time, inflation is likely.” I take a different view.

As Bowyer points out, just because the Fed amps up liquidity, it doesn’t mean the banking sector will. This point needs to be examined, because it actually provides the key to inflation expectations. But the analysis needs to go beyond a discussion of liquidity and money supply, whether broad or narrow. We need to take a look at the debt situation.

This means that the key to understanding monetary ebbs and floods is correctly to apprise this debt situation. And despite years of supposed deleveraging, the current environment is still one of debt overhang. The debt load hasn’t shrunk, but only increased. Bailouts have only served to keep bad loans from going bad; Keynesian “stimulus” has only served to keep failed enterprises in business. On both counts, it is a zombie existence that is on offer. We live in a world of life support, which could explain the current popularity of zombie movies – people sense the artificiality and indeed the surreality of this economic living death. One of the most instructive graphs I have ever run across, published by the Wall Street Journal, pictures the global debt situation, both public and private, in all its starkness. Even though it only runs through 2012, it is well worth taking in; the situation in 2013 hasn’t improved.

What this means is that there is an amount of currency, in one form of circulation or another, equal to this level of debt; the amount cannot increase unless the debt load increases, and we are currently maxing out our collective credit card (as Anthony Crescenzi makes clear in his book Beyond the Keynesian Endpoint). The debt overhang cannot be sustained; it must be reduced by hook or by crook. Simply shifting private debt to public debt, which is all that Keynesian policies have accomplished, only perpetuates the living death. Debt cannot continue to be rolled over, it must be eliminated – either through repayment or through failure — if there is to be any prospect of growth. As far as the money supply is concerned, this means that the money supply must shrink, unless new debt, funding new productivity, comes on line to replace it. And that is a recipe, not for inflation, but for deflation, or at least stagflation (in the zombie sense, not the 1970s sense).

Economic growth would allow us to grow out of this mess, but economic growth will not come without rechanneling wealth away from the corpses of  zombie economics and towards productive investment. But investors are chary: those corpses provide a guaranteed return, thanks to their being propped up by “too big to fail” government policies. Which is what makes them relatively more attractive. We need to rethink priorities, and make the hard choices politically, pulling the zombies off of life support, and steering the funding to investments that will generate an enduring return.

Until that happens, inflation, as they say, “ain’t happenin’.” And gold will be left twisting in the wind.