Cavuto and Bowyer on Syria and Markets 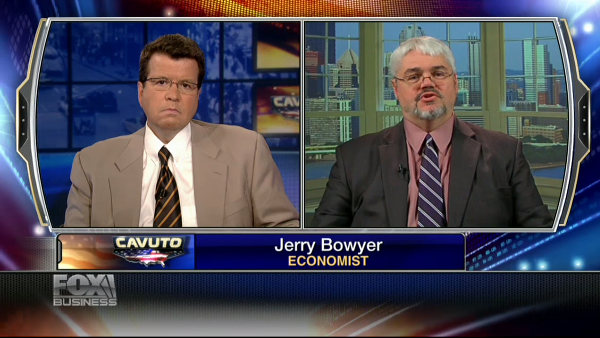 Earlier this week, my friend Neil Cavuto had me as a guest on his show, the aptly named Cavuto on Fox Business News.  At the time the US was still considering an airstrike against Syria. I’m grateful that I did not predict a Syria strike would occur, and for far more important reasons than my reputation as a prognosticator. You can watch the video here or read a transcription below:

Neil: “Now, you know the obvious risks with Syria but do you really know the real cost of Syria? Because my friend Jerry Bowyer is right: A whole lot of economic things could go wrong — very wrong. Especially if we strike Syria and something goes even slightly wrong. Putin gets involved; Iran gets involved; China gets involved; the whole Middle East gets involved; oil ports get disrupted; our nation’s far-from-quick response gets even more disrupted. Jerry, you say that’s maybe just for starters so it doesn’t take much to tip this, does it?”

Jerry: “No, it doesn’t. In fact, it’s not even a matter of, “The whole world might get involved.” It’s, “The whole world is involved.” Syria’s not a very big country; it’s a $60 billion per year GDP, doesn’t produce a lot of oil, doesn’t have any oil ports to speak of, and isn’t near any choke points. So why has gold gone up? And why is oil going up? And why have markets been hurt as we’ve had this run-up to war? I suggest that it’s because global investors understand that this is a proxy battle between old grudge powers in the Middle East — between the Saudis on the one hand and the Iranians on the other. Behind that proxy battle is an even bigger global proxy battle between the United States and Russia. So, I think markets sense that there are big stakes here that are a lot bigger than anything having to do with this tiny little country with an inconsequentially small economy.”

Neil: “I tend to have a different view on this, in this respect. I talked about the whole world getting involved – I don’t think the world has much, if any, interest in getting involved in this and that’s evident so far – the president’s inability to get any country behind him on a coalition, or even to get the Saudis to explain what they mean by agreeing to military intervention but strikeout the idea of using a military strike. So, what if it’s all more bluster than bite here?”

Jerry: “Well, actually that’s what I think is the case. I think that’s why the market’s up so much today, I think that’s why gold is flat, and I think that’s why Brent is down almost 2%. Because I think right now the market is beginning to price in a nothing-happens scenario. I’m not predicting that we’re going to strike Syria, all I’m saying is: If we strike Syria, it is a high-risk event — much higher than the small regional stakes would cause someone to believe. Listen, when Muhammad died fourteen hundred years ago, Islam developed a problem it’s never really solved: Who’s supposed to govern Islam after Muhammad. One group said, “Well, it’s his descendants,” and another group said, “No, it’s his religious leaders.” And for fourteen hundred years those two groups have been slaughtering one another – that’s the battle in Syria right now. Sunni versus Shia. There’s nothing that we’re going to do, coming in there with aids or bombs or diplomacy, that’s going to unravel that fourteen hundred-year-old grudge match.”

Neil: “If I could put it back to domestic considerations a second, Jerry, before I let you go. I was talking to one Wall-Streeter, a pretty prominent individual, who was saying, “You know, the flipside of all of this is that no one would even think of shutting the government down in the middle of this; no one would even think of playing games on the debt limit, whether you’re for or against that whole strategy.” And all good to him, in his selfish little green world. What do you make of that?”

Jerry: “What I make of that is that he’s right. That war really focuses the attention. When war is on the table, everything else is off the table. We’re not going to be talking about debt limit fights; all of the stuff that Washington talks about that’s about completely domestic power struggles goes away when there’s a war. Of course, after the war goes badly then it comes back twice as bad. It just defers the problems. So I get what your friend is saying, that a strike in Syria might distract us from our fiscal problems, but when we come back the fiscal problems will be there and then we’ll have all the problems of a strike in Syria on top of that. It delays our dealing with our troubles for a little while – it distracts us from them – but it doesn’t really deal with them.”

Neil: “I think you’re right about that, which should make you run the other way, Jerry. It’s always good having you. Thank you very much.”