The Hypocrisy of Humanitarian Interventions 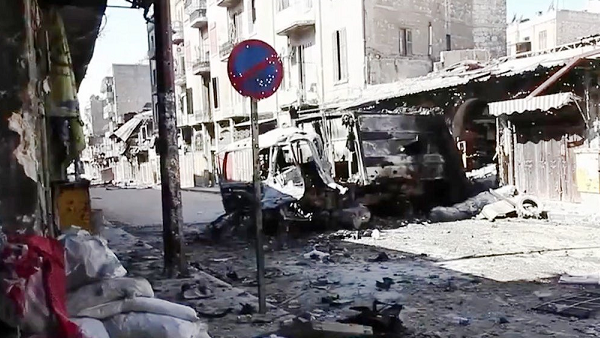 If the current trend of the Syrian Civil War is not reversed, it will end in an Assad victory. And the recent in-fighting between opposition forces only makes that outcome more likely.

Much like the situation in Libya before NATO involvement, the trend in Syria has been clearly leading to an Assad victory. This was the case even before the sarin gas attack in Damascus. The parallels between the two conflicts are obvious, even to the casual observer. In both cases, government forces were hesitant to use the full power of the state army to crush the rebellion, fearing the prospect that large scale fighting would provoke Western intervention. So, in the early stages of both the Libyan and Syrian wars, the opposition fighters developed a false sense of momentum, a feeling that they could actually overthrow the tyrants who stood over them. Those feelings were ultimately unfounded, as both Assad and Qaddafi could not hold onto the larger cities without the full use of their armed forces and were both ruthless enough to use them. The momentum behind both rebellions eventually had been reversed, and the course of the wars subsequently turned in favor of government forces.

At that point, the nature of each conflict changed.  Faced with at least twenty thousand dead in Libya, the UN endorsed a NATO intervention hoping to end the conflict quickly. In reality, the intervention prolonged the war; had there not been air strikes, training of rebel forces, and a no-fly-zone (all courtesy of the Western powers), the war could have ended several months earlier with a Qaddafi victory. Yes, Qaddafi was forced from power and ultimately killed, but whether or not the scenario of a shorter, less deadly conflict that ended with Qaddafi staying in power is preferable to the current situation is debatable. Given the similarities between the conflicts, how is that the Western powers can justify intervention in Libya, but not in Syria?

Though it is probably the case that the Obama Administration had some (now dashed) hopes for Libyan regime that was more pro-West than Qaddaffi, the reasoning for the Libyan intervention was almost purely humanitarian, at least officially. But for all the humanitarian abuses the Libyan people faced, the Syrians face even worse. There have been at least two million Syrian refugees, while the Libyan count numbers somewhere around one million. Furthermore, roughly five times as many people have been killed in the Syrian civil war than were in Libya. And, perhaps most importantly, the West has a strategic interest in seeing the Ba’ath Party fall: It has been an enemy of the United States and its regional partners, Iran’s only ally in the region, and a state sponsor of terrorism. Whatever may replace the Assad regime if the rebels somehow succeed, it’s hard to imagine it being worse than Assad. That was not the case in Libya which actually had been moving closer to the US on a number of issues.

In comparing Western policy in both cases, it seems hypocritical to refuse direct military involvement in the one conflict and to grant it in the other. All the reasons that were used as justification in Libya apply two-fold in Syria, and in addition there exists a national interest in regime change.

Of the three apparent reasons against intervention, it seems that there are only two that the Western powers could argue without significant political fallout: one, that the opposition is so extremely fractured that the emergence of the more moderate elements, like the Free Syrian Army, is increasingly unlikely, and two, that the fragile recoveries of the United States and France make intervention too economically taxing to justify. In the United Kingdom, Parliament had expressly forbidden military action, so any coalition would have been financed and conducted primarily by the United States. Despite France’s interest in closer ties with Israel and Saudi Arabia, it was simply not in any condition, politically or financially, to lead a coalition.

But if you are an adherent to the principles of humanitarian intervention, as it appeared in March of 2011 that President Obama was, those two reasons are dubious. If President Obama has adopted the principle that there is a great moral obligation for the strong, Western, liberal democracies to protect citizens under oppressive regimes, that obligation does not simply go away when public approval for an intervention dips below 50%. The Western powers, primarily France, are guilty of hypocrisy in foreign affairs in yet another case recently, with their most recent intervention in the relatively small conflict in the Central African Republic. Only Prime Minister Cameron, with Parliament definitively voting against intervention, has a truly defensible excuse for involvement in Libya and not Syria.

There is a third argument against intervention in Syria, which, unlike the previous two, Presidents Obama and Hollande cannot realistically admit too without severe political backlash; the United States, and indeed all great powers, favor humanitarian intervention only when it is politically popular.
The widespread belief, particularly in continental Europe, that the United States is something of a bully when conducting its foreign affairs is completely false, when you examine the history; compared to other great powers and empires, even the relatively liberal British Empire, the United States is reluctant to involve itself in the internal affairs of other nations. The nature of humanitarian intervention in the United States is that it is done only when it is domestically politically beneficial, not when it is, at least in the minds of its advocates, morally required.

There are various cases in recent history of the United States involving itself, for at least partially humanitarian reasons, in a civil war or interstate conflict, and then choosing to stand aside when another, similar conflict erupts. In every one of those cases, the lack of intervention was purely for political reasons. Western inaction in Darfur, only a few years after the United States and its NATO allies involved themselves in Kosovo, is a popular example of this. The cause of the intervention in Kosovo, which was long overdue and rather reluctant when it actually did happen, was geography; it was a conflict intolerably close to home for most of the states involved. Apparently, genocide in Europe is less permissible than genocide in Sub-Saharan Africa. This is but a single example of the selective morality that defines humanitarian intervention. The hypocrisy of the West in the two civil wars the Arab Spring produced is only the most recent example of this trend.

The United States, France, and the United Kingdom are simply unwilling to bear the political burden of domestically unpopular, economically taxing, long-term commitment in other nations. Libya was a comparatively small war that was not expected to last very long in the face the full power of NATO air forces, and the same can now be said about the Central African Republic
Compared to the CAR civil war or Libyan civil war, the Syrian conflict is far more complex; there are too many different militant organizations, primarily Islamist, operating within Syria’s borders for NATO to simply bomb Assad into submission and then pull out entirely, like they did in Libya. The moderate elements of the opposition, like the Free Syrian Army, are not powerful enough to be able to truly control the state following a hypothetical overthrow of Assad. So, a U.S. or U.N. peacekeeping force would be required to stay in the country after Assad’s fall to ensure a peaceful transition of power to the FSA. The follow-up to a Syrian bombing campaign would probably resemble the NATO occupation of Kosovo, and it goes without saying that the American public would not react enthusiastically to a third military occupation in a Middle-Eastern nation.

In the early days of the Libyan civil war, President Obama declared that the United States had a “moral responsibility” to intervene, and that not doing so would be a “betrayal of who we are.” Despite that, he kept with the tradition among great powers, and decided against committing U.S. military force to a conflict that has killed and displaced far more people that its predecessor.