The Most Important Chart For 2013

As we ring out the old and ring in the new, investors face what seems a fresh world of opportunity. After all, stock market gains exceeded 20% last year, with “more of the same, but not quite as much” on tap for 2014. Yes, the quest for alpha can continue without letup. The punch bowl is still out there.

Many of the contributors to Business Insider’s 128 “Most Important Charts of the Year” for 2013 share that sentiment. Take Jared Woodward of Condor Options. Looking at 2013’s Incredible Stock Market Gains, Woodward’s chart shows that 2013 performance exceeded the range indicated by options at the start of the year, the first time that has happened since 2008 (although in 2008, it was in the other direction).

Then there is Michael Harnett, Chief Investment Strategist at Bank of America Merrill Lynch, who sees “Stocks in a big breakout.” Harnett has “policymakers slowly winning the ‘War against Deflation,’” which is good for stocks but bad for bonds. So, “in the absence of higher inflation and/or lower earnings, stocks should be up again in 2014.” Keep chasing those returns!

Gerard Minack, Principal of Minack Advisors, points out another trend from 2013 auguring well for 2014 performance. Minack notes that “equity markets stopped worrying about swings in macro,” meaning they stopped factoring in macroeconomic developments. This can only mean that stock markets became disconnected from the real economy. That’s a good thing? Minack is reticent: “We no longer worry that macro weakness will cue more systemic stress. In short, markets think we’re back to normal. I don’t think we are, but that’s another story.” Indeed.

So some of the chart choices do in fact point up flies in the ointment. Marc Chandler, SVP and Global Head of Currency Strategy at Brown Brothers Harriman, sees a worrying trend in the divergence of profits from business investment. Investment, which historically has correlated with profits, since 2000 has run counter: “another key characteristic of surplus capital and … one of the channels that relates to the financial crisis.” In other words, fundamentally negative trends in the economy have not been turned around. Capital becomes “surplus” when, instead of being plowed into productive activity, it is withheld to be put in the pursuit of quick and/or easy returns. “Corporations … have also kept a growing part of their capital outside the production process.” That it is businesses that are doing this does not bode well for fundamental economic growth, but rather for bubble growth.

My choice for the most important chart for 2013 is missing. It is the one correlating the trend of the Dow Jones Industrial Average and the Federal Reserve’s balance sheet during QE, or quantitative easing, over time. This is what it looks like from August 1, 2007, thus before the onset of the credit crisis, to January 1, 2014. 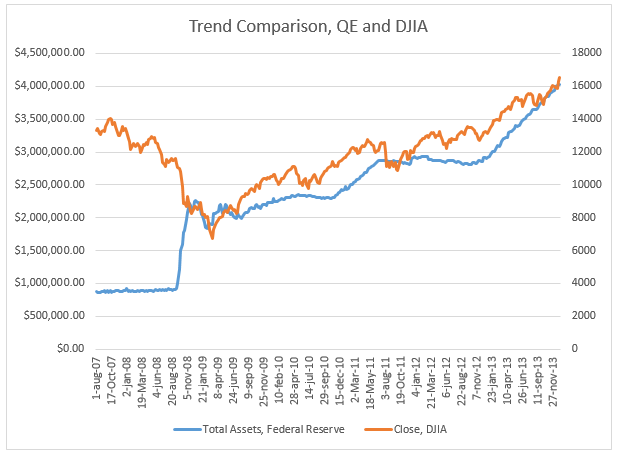 As should be blindingly obvious, there is a tight correlation between growth in the Fed’s balance sheet and the performance of the Dow. It appears that, in effect, the Fed has been financing the stock market’s gains by providing assets to New York banks to the tune of $85 billion a month (over $1 trillion in 2013). So, as long as the punch bowl is still being replenished, have at it, alpha seekers! But what happens when someone comes along and takes the punch bowl away? After all, how sustainable is $1 trillion-plus growth in the Fed’s balance sheet per year?