The Fed, Jobs Bank for the Ruling Class 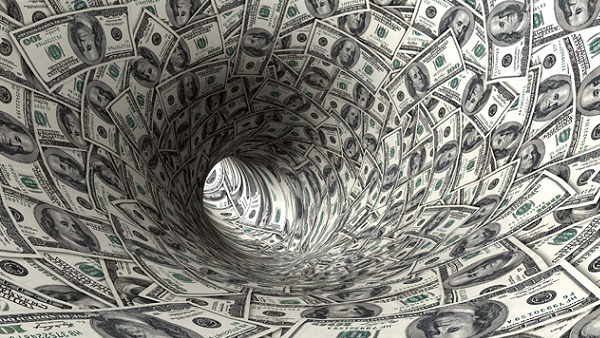 I really can understand why Americans increasingly feel that the system is rigged — to a large degree, it is. I don’t mean the system of free-market capitalism; freedom is non-rig-able, at least in the long run. It takes power to rig the system, and one of the great powers that the federal government has, through the Federal Reserve Bank, is the power to create money from thin air. What an enormous advantage, which makes our ruling class almost god-like. In fact, the word fiat (as in ‘fiat money’) comes from the Vulgate — the Latin Translation of the Bible attributed to Saint Jerome. In the beginning God ‘fiat lux‘; ‘let there be light’. In other words, fiat means ‘let there be’. It’s how God created the various elements of the world in the Vulgate. It’s how our self-appointed gods create the various elements of our monetary and financial system. But there’s a big difference between the two; our gods are not omniscient, nor even very wise, and what they have created cannot really honestly be called ‘good’.

What they’ve created is a very wealthy and powerful dependency class of people who work in and around our nation’s capital. Most of us know that this applies to federal government bureaucrats, but there is a small army which works for Government sponsored entities such as Fannie Mae, away from the disclosure requirements and salary limits associated with official government employments. It’s a place where loyal friends of the regime can be sent to make the big bucks as a reward for faithful service. Barney Frank’s boyfriend worked there developing and expanding sub-prime mortgages, and Rahm Emmanuel collected handsome fees there after loyal service to Clinton. And it isn’t just Dems… For example, a former McCain senior staff member has done quite well consulting for GSEs.

But what keeps it all going? Not the market. It’s the fiat money machine. That’s what we learned this week from a Wall Street Journal Report.

“It’s good to have the Federal Reserve as a friend.

Fannie Mae FNMA -2.20% and Freddie Mac FMCC -2.65% put in strong financial performances last year. But national accounts data released this week suggest these were largely built on the Fed’s purchases of the securities backed by the two mortgage giants. And while this may have helped them achieve record profits, it’s also a warning about what might happen as the Fed’s role fades.

Investors simply didn’t have the appetite to swallow that $247 billion. In fact, the private sector moved sharply in the opposite direction, cutting $316.4 billion from its exposure to securities issued or backed by Fannie, Freddie, Ginnie and other government-sponsored entities. Households, nonprofits and corporations shrank their portfolios by $137.1 billion. Foreign banks and investors sold $98.3 billion.”