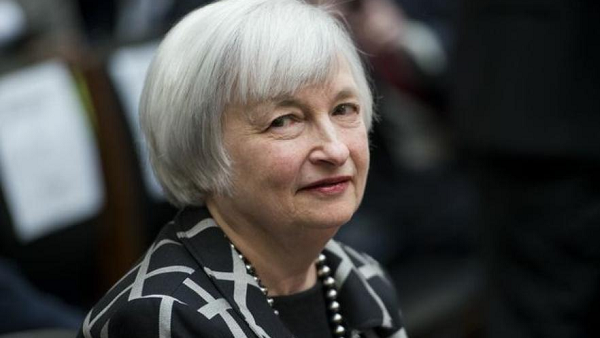 Imagine how you would feel if you were in the following situation.  You’re taking a trip on the U.S. Economy Bus Line.  There are 319 million people on the bus with you.  It has been a rough ride so far, with lots of lurching and swerving.

You look out the window and see a sign a little ways ahead.  It says, “Welcome to 143.6 Million FTE* Jobs.”  You turn to a fellow passenger and say, “Hey, wait a minute.  I think that we passed that sign back in November 2007.”

Federal Reserve Chairman Janet Yellen is driving the bus.  There are eleven guys up front, wearing FOMC T-shirts.  They are pouring over maps, and arguing about whether, when, and where the bus should turn.  Then you notice, to your horror, that Ms. Yellen has her hands on the rearview mirror, rather than on the steering wheel.

Question: Where would you expect the bus to go next?  Answer:  You would have no idea, and neither would anyone else.

The U.S. economy added 302,000 FTE jobs in September.  At this rate, the labor market would claw its way back to the FTE employment level of November 2007 by the end of this year.  If so, this would mean that full recovery from the 2008-2009 recession would have taken more than seven years.

Of course, such a “recovery” would really be nothing of the sort.  From the November 2007 FTE jobs peak to September 2014, our working age population grew by 15.3 million.  On the margin, only 1.9 million of these people entered the labor force, and not one of those that did got a job.  In fact, as of September, we were still 923,000 FTE jobs short of the level of November 2007.

Labor Force Participation (LFP) continued its slide during September, sinking to 62.73%.  This is a level last seen in February 1978.  The decline in LFP since President Obama took office amounts to 8.1 million people fleeing the workforce, many of them into the arms of our burgeoning welfare state.

The unprecedented plunge in LFP has rendered meaningless the “headline” (U-3) unemployment rate, which is what the Fed suggested earlier this year that it was following.  Adjusted to the LFP of December 2008, September’s unemployment rate was 10.3%, which is a far cry from the reported level of 5.9%.

So, what happens now?  Investors and businessmen have been doing the best they can in the face of the federal government’s dysfunctional monetary, tax, and regulatory policies.  Thus far, the best efforts of the private sector under these conditions have produced the slowest economic recovery in American history.  During the first five full years of the Obama/Bernanke/Yellen recovery, annualized real GDP (RGDP) growth averaged only 2.21%.

RGDP and jobs are driven by investment, and unstable money suppresses investment by creating additional uncertainty about the future.  More than 100% of job growth comes from companies that are less than 5 years old, and the Fed’s improvisational, 100% discretionary monetary policy has made investors reluctant to fund startups.

Anyone that thinks that capital is cheap right now should go out and try to raise some for a new venture.  Capital is cheap for established companies that want to borrow money to buy up their own stock, but it is very expensive and difficult to obtain for startups.  This is because investors know that a violent monetary deflation, like the one that the Fed produced/allowed during 4Q 2008 – 1Q 2009, would kill most new ventures.

The high real cost of capital produced by the Fed’s rules-free monetary policy shows up in the slow growth of real nonresidential assets (which drive both RGDP and jobs), and in stagnant real incomes.

During the five years from 2009 through 2013, real nonresidential gross investment averaged only 15.86% of RGDP.  The corresponding number for the last 5 years of the Clinton/Gingrich boom (2006 – 2000) was 18.17%.  The difference between these two numbers equates to 1.02 percentage points of annual RGDP growth.  This increment of growth represents the difference between stagnation and prosperity.

Capital and labor divide the sales dollar, and if capital’s share goes up, labor’s share must go down.  Since the Fed went to a fully discretionary monetary policy in 2001, real median household incomes have dropped by about 8.5%.  This has been catastrophic for ordinary Americans.

This brings us back to the problem of having a Federal Reserve that is trying to manage the economy via interest rates.

First, the Fed is not, and can never be, competent to manage a system as complex as the U.S. economy.  Instead, the economy must manage the Fed.  If the Fed based its monetary operations upon an appropriate rule (e.g., “keep the CRB Index** stable”), then the economy would be controlling the Fed.  This is, in fact, the only kind of arrangement that has ever yielded prosperity.

Second, right now, controlling the value of money via the Fed Funds rate (which, with $2.6 trillion in excess reserves in the system, can, in turn, only be managed via the interest rate that the Fed pays on bank reserves) is the equivalent of trying to steer a bus with the rearview mirror.  It doesn’t matter which way you turn the thing, because it’s not connected to anything.

The dollar has been so weak for so long that a stronger dollar could provide welcome relief—up to a point.  However, if the Fed continues to try to steer with the rearview mirror, eventually our economic bus will run off the road.

What the economy needs is a stable dollar.  A stable dollar would encourage and support investment.  More real nonresidential investment would, in turn, lead to rising RGDP, employment, and wages.

Only a rules-based approach to monetary policy can provide the stable dollar that our economy needs.  Meanwhile, would someone please tell Chairman Yellen to take her hands off the rearview mirror, and put them on the steering wheel?  Until Congress enacts fundamental monetary reform, the Fed should target commodity prices, not interest rates.