The Ebola Epidemic Is Dying

We continue to hear the Ebola epidemic is “spiraling out of control,” “growing exponentially,” and so on. This after the first round of warnings in September in which the World Health Organization (WHO) has called it the “worst health crisis in modern times.” Worse than the “Spanish flu” of 1918-19, which extrapolated to today’s world population would mean 60-150 million deaths? So you know they’re fudging it; it’s just the matter of degree. Which is a lot. Fact is the epidemic plateaued in mid-September and now the bottom is falling out.

Not incidentally, the peak came before the WHO hit the panic button,  insisting among other things it needed a billion-dollar infusion. Remember this when WHO inevitably claims their projections proved false only because they made them so with their own super-human actions.

Who says it’s peaked? That’s right, the WHO. In their weekly reports that you’d think reporters are forbidden to consult. These graphs are from the WHO’s latest weekly situation update, October 29. 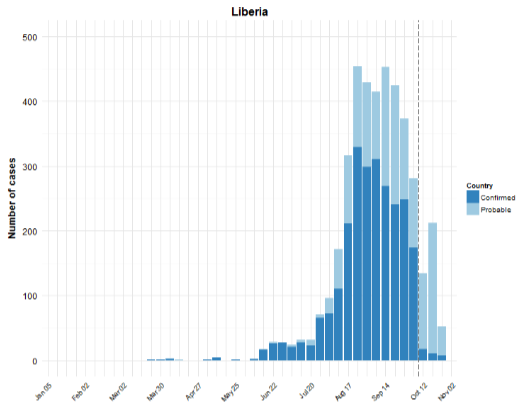 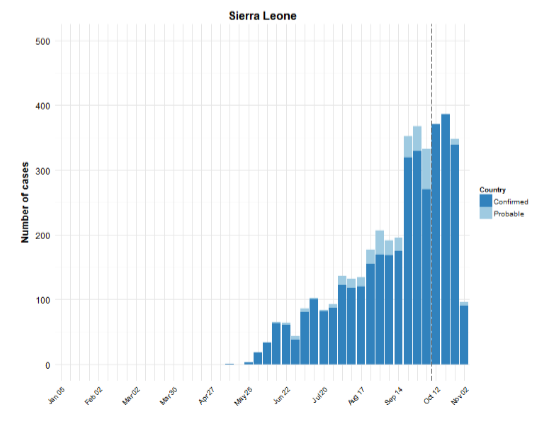 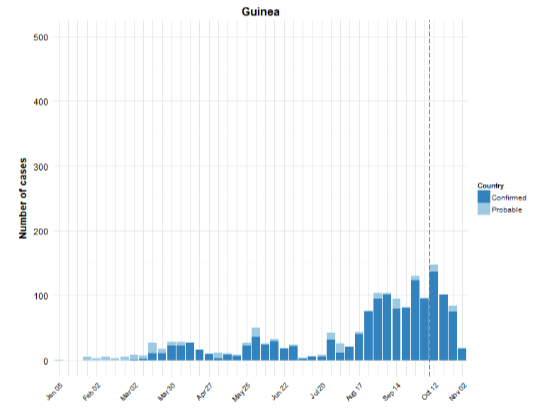 In Liberia they peaked way back in August, somewhat later in the other countries. Now it’s simply collapsing and would be even if all the unconfirmed cases somehow incredibly turned out to actually be Ebola after the test is administered. Tough luck on that; fact is about half of all “Ebola” cases are unconfirmed and most will stay that way. It keeps the numbers up, just as did the WHO’s sudden “discovery” of about 3,000 cases laying around in a drawer or something.

But, but, but… Didn’t the CDC predict as many as 1.4 million cases by January? Yes, and I’ve been writing all along that was nonsense, as well as the WHO’s model, with my most detailed analysis in the science journal Inference. I explained the CDC and WHO models, which were used in the World Bank report concluding the epidemic could cost as much as $32.6 billion, simply ignored one of the most basic rules of epidemiology, that cases don’t keep climbing exponentially until the whole world is infected.

It’s called Farr’s Law, and has been in use since the mid-1800s. It means cases rise fastest at first, then more slowly, then flatten and decline. With or without outside organizations like the WHO and CDC, with or without treatment medicines or vaccinations. As with financial bubbles, the agencies simply “assumed” cases would keep increasing forever with no effort to look at underlying fundamentals. You may recall how the term “New Economy” was coined to make people think the old economic rules no longer applied. Call this the “New Epidemiology.”

So it should have been no surprise that both the CDC and WHO models have already failed. The CDC actually had two dates for its estimates. There was the January 20 one, but it also projected 8,000 – 21,000 confirmed cases CDC estimated as of September 30. Yet there were fewer than 7,500, with only about 4,000 confirmed.

But safe in the knowledge that nobody in the media will ever challenge them, the WHO keeps ramping up the estimates and without bothering to publish how it arrived at them. Thus in an October press conference, WHO Ebola head, Bruce Aylward said:

1. Currently there were about a thousand new cases a week;

2. It’s “too early to say” whether “the epidemic [is] slowing down” [emphasis added] or there’s “exponential growth,” and;

3. “We anticipate that the number of cases occurring per week by [December] is going to be somewhere between five and 10 thousand.”

Yes, and if it’s Tuesday it will rain fish. Naturally the entire media went for it, always using the upper boundary. “10,000 cases by December!” Nevertheless, I contacted the WHO. They wrote back: “About 1,000 cases were reported to WHO in the week starting September 15. At that point, case incidence was doubling every 4.3 weeks. If that rate of increase continues there will be about 5,000 cases in the 1st week of December. But we might be seeing only half of the true number of cases, so there could be 10,000 in total.”

So they’re confusing overall cases with what Aylward was addressing, which was new cases. Assuming WHO’s fiction, then yes by mid-October you’d have 2,000 cases, on November 15, 4000, and on December 15 about 8,000 more cases than the September 15 baseline. Two weeks earlier, December 1, would be roughly 5,000 cases more than mid-September.

It’s possible Aylward wasn’t lying at first, but rather was confused. Nevertheless, by not later admitting that he put out false numbers, he was intentionally deceiving us. The WHO quickly threw something together to back him up. But it’s unpublished and never will be. They’re counting on the short half-life of the media and public memory. By December 1, the estimate will be completely forgotten. How many articles have you seen about the WHO first estimate falling dramatically short?

And the 10,000? Just added for good measure. It’s okay to talk about missed cases, but not misclassified cases.

Not that others haven’t gotten in on the act. Last week NBC News reported “But the situation in Liberia remains dire by any measure. The British medical journal Lancet Infectious Diseases reported this week that Ebola could kill 90,000 people in Liberia alone by mid-December if the world doesn’t accelerate its response.” See the above chart. Liberia has reported almost no confirmed cases in three weeks. Suspiciously, virtually all are unconfirmed. But if every single one was confirmed, it would be below 400 cases in three weeks and remarkably lower than in previous weeks. So to get 90,000 deaths the Liberian epidemic would have to suddenly and inexplicably reverse and pile up about 130,000 cases (at a 70 percent death rate) in just six weeks.

This isn’t science they’re trying to sell; it’s black magic. The WHO, the CDC, and the usual suspects who have political agendae or just like being quoted on the evening news are doing what they’ve done with every major disease outbreak since AIDS, pumping up the numbers to pump up funding That’s included Ebola twice before, SARS, avian flu, swine flu, and Mideast Respiratory Syndrome.

This time, short the stock.