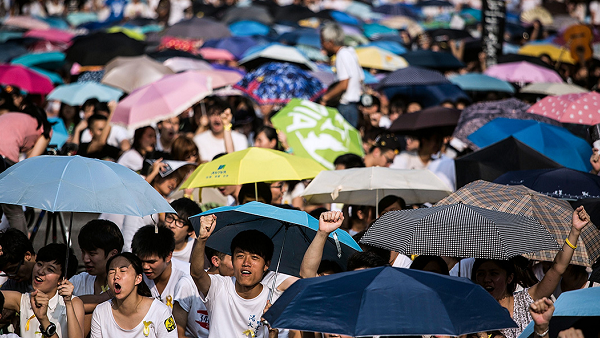 The “Occupy Central” protests in Hong Kong, also called the Umbrella Revolution (Chinese: 雨傘革命), are a civil disobedience campaign for universal suffrage and to democratize the nominating process of political candidates.  On 28 September, protesters blocked both of the east–west artery routes on northern Hong Kong Island near Admiralty, Causeway Bay and Mong Kok. At the height of the protest in mid-October, the number of protesters peaked at more than 100,000.  Beijing authorities took the strategies of “ No Acknowledgement, No Negotiation, No (Police) Engagement”  to wait and see.  By early-December, after smaller skirmishes with the police, the momentum ran out and everything returned to normal.

During these months, there are many voices either for or against the movement. However, one voice is conspicuously absent. “Central Gold Boys 中環金童” , the nickname for HK Financial Industries, has been overwhelmingly apathetic through it all. I had a conversation with B.T., a veteran HK investment banker to explore the issue at his favourite dim sum restaurant.

YC: “It seemed like Occupy Central was inconsequential to many in the financial industry except for the traffic problems it caused.”

B.T.: “Occupy Central is a waste of time because their leaders don’t know how to communicate with the financial industry.  We are responsible for 40% of the HK GDP.  Trust me, if protesters were able to build alliance or able to explain themselves well to the financial community, it would be a very different story today.”

YC: “So, in your opinion, Central Gold Boys stayed neutral because they do not feel connected? “

B.T.: “Yes, there is no urgency for us. Since the handover in 1997, Hong Kong prospered by being a bridge as foreign capital flowed into China and Chinese capital went out to the world. Our first concern is stability, clarity of the law, a fair and equal environment for competition, and to minimize “uncertainty factors” being associated with China.  The demands for Occupy Central were never framed in economic terms that we understood; so the financial industry naturally opted to stay out of the protest and kept focused on making money.”

YC: “I am curious. How would you explain it to the Central Golden Boys?”

B.T.: “The Hang Seng index has vastly underperformed the U.S. index over the past five years, and regulators are still no closer to addressing recurring instances of misrepresentation and fraud by mainland Chinese companies listed on the HK Exchange. In 2013, close to 60 companies have had their trading halted or are under investigation for fraud.  The damage to the HK Exchange’s reputation is hard to repair. The Alibaba Group abandoned their IPO when HK refused to allow the company to hand-pick most of its board members. Alibaba actually expected the existing rules of the Exchange to be altered because they are big with deep political connections. Beijing’s complex political-business under-the-table machinery of mainland China has been steadily creeping into HK through backroom deals, corruption and interferences. The bedrocks of the HK financial industry — transparency, rule of law, and sense of fairness are already under attack.”

YC: “Now, that sounded really bad coming from you!”

B.T.: “Exactly. HK derived its value as a gateway of China. We provide security and stability for these international transactions daily.  What if, one day, the HK business environment became just as murky, unpredictable and untrustworthy as China’s? There would be no more value added for the HK financial industry to the international or Chinese business community.”

B.T.: “ Of course. That is why we need a democratic process for HK elections, to allow candidates who care about the future of HK to manage this place to ensure an environment of openness, transparency, and fair play for businesses.  Too bad that there are very few financiers who can think through to this level. The few people that do, probably don’t know how to join force with the protesters in a meaningful way.”

YC: “HK is a small place and you know a lot of people. Did you have an opportunity to interact with the leadership of the protest organizations? “

B.T.: “Once socially, but it wasn’t much use. The university students felt the old generations like me have betrayed HK by holding a 2nd passport. The social action arm of the protest distrust business people; they think we are all in Beijing’s pocket.“

It is unlikely for HK to have another major civil obedience protest like the Umbrella Revolution anytime soon. We can only hope that profound interdisciplinary dialogues occur soon that can lead to deeper understanding and collaboration for a better future for Hong Kong and China.