On January 15, the Swiss National Bank (SNB) sent shockwaves through world financial markets when it abruptly abandoned the “peg” under which it has kept the exchange rate between the Swiss franc and the euro at 1.20 SWF/EUR since September 7, 2011.  In response, the exchange rate fell sharply, closing at 1.02 SWF/EUR on January 23.  This is equivalent to the franc rising in value by 17.9% in terms of the euro.

Meanwhile, the European Central Bank (ECB) launched its long anticipated “quantitative easing” program, promising to buy €1 trillion of Eurozone sovereign debt, at the rate of €60 billion per month.  Partly as a result of the announcement of this larger-than-anticipated QE effort, the value of the euro in dollars fell by 4.4% from the end of December to January 23.

Back in the U.S., the Federal Reserve appears to have embarked on a program of doing nothing (other than talking about someday “raising interest rates”).  After increasing under QE3 by about 60% from the end of September 2012 to the beginning of August 2014, the U.S. monetary base has basically flat lined.  Interestingly enough, the “constant maturity” interest rate on 10-year Treasuries fell from 2.49% to 1.90% after the Fed stopped “printing money.”

The chart below tells the tale. 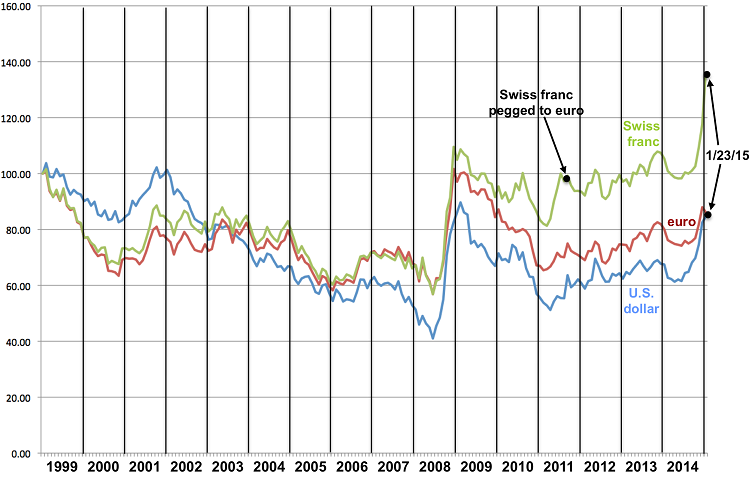 The fundamental job of a central bank is to keep the value of its currency constant in real terms.  The best real-time indicator of the real value of a currency is the reciprocal of the CRB Index (expressed in that currency).

As shown above, since 1999, the SNB, the ECB, and the Fed have done a terrible job of managing the currencies for which they are responsible.  The cost of this central bank malfeasance to the world economy, and to the economies of the nations in question, has been very high.

Monetary inflation, which the U.S. suffered from late 2001 to mid-2008, is pernicious, because it causes investors to divert capital to unproductive inflation hedges (the U.S. housing bubble in the mid-2000s was an example of this).  However, monetary deflation can be even more damaging.

There is always plenty of money around to support any rate of transactions (i.e., GDP) that people want to do.  However, people exchange money for “stuff” only when they judge the stuff to be worth more than the money.

Unfortunately, as shown above, the real value of a fiat currency can change by so much, so fast, that the general price level can’t keep up with it.  Between June 2008 and February 2009, the Fed allowed the real value of the dollar to more than double (it rose by 118.7%).  The result was the worst economic crash since 1930.  With money suddenly much, much more valuable and prices essentially unchanged, people stopped buying stuff, GDP plummeted, and unemployment soared.

The markets obviously don’t believe that the ECB’s €1 trillion QE program amounts to “debasing the euro.”  The recent decline in the real value of the euro has been modest, and it has left the euro (on January 23) still worth 16.2% more vs. the CRB Index than it was in June.  The ECB has been permitting monetary deflation, which can be deadly to stagnant, debt-burdened economies (e.g., that of Greece).

The ECB has been criticized for “money printing,” but printing money is the basic function of a central bank.  There is nowhere else for base money to come from.  What the ECB actually deserves censure for is its failure to do its basic job, which is to keep the real value of the euro stable.

This brings us to the Fed.

While the FOMC has been whiling away its time doing “dot plots” of what the (completely irrelevant) Fed Funds rate might be at various times in the future, the real value of the dollar has increased by 37.5% since June.  This is dangerous, especially since the change is obviously not intentional on the part of the Fed.

The world is not currently experiencing a “currency war.”  Or, if it is, the combatants have their monetary guns pointed at their own economic heads.  All of the major currencies have been rising, rather than falling, in real value recently.

So, where should we go from here?

The Fed should bring the CRB Index back up to an appropriate level (e.g., 300, which was the level of February 2014), and then keep it there permanently.  If we do that, most other countries will peg their currencies to the dollar, and the threat of idiotic “currency wars” will end.