We’re still at the start of a new year. The question on everyone’s mind is whither the prices of gold and silver? This Brief presents our answer (and the full Monetary Metals Outlook 2015 report gives our reasoning).

One approach to the question of price is to draw a line, extrapolating the past trend into the future. Here is the graph for gold.

We don’t think that most traders would do something this simple (though some mainstream anti-gold commentators might). Our point is that technical analysis is about looking at the trend. We do not believe that the past trend in the gold price is likely to be a good predictor of the price in the future, because the past drivers of the price won’t be operative in the future.

Another approach is to plot gold against M1 money supply. Here’s what that looks like. 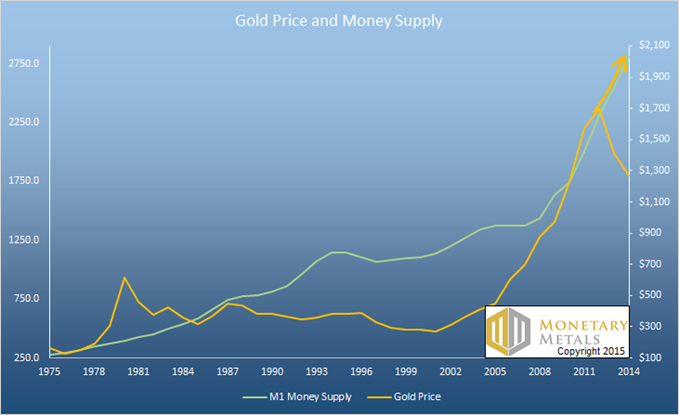 This implies that the price already ought to be well over $2,000 and unless central banks put down their keyboards and back away, it will be hundreds of dollars higher by the end of 2015.

We don’t believe this approach, or any approach based on the quantity of money, is valid. At best, one can find correlation without causality. For example, some people thought that there was a correlation between the winning conference of the Super Bowl and the presidential election (an NFC win was supposed to forecast a Democratic president). We think this chart proves there is no causal link between money supply and the gold price.

Other analysts attempt to calculate a gold price based on inflation—by which they mean rising consumer prices. They say gold should do well in inflation. And, they say that it should be coming any day now because look at how fast the money supply is growing. We don’t think that the money supply drives consumer prices any more than it drives the gold price. The crashing commodity markets over the past few years—notably oil in the second half of 2014—should once and for all debunk this idea.

Gold is not purchased for consumption. So even if consumer prices were rising, that does not mean that the gold price must rise. Or, vice versa. Consumer prices are influenced by numerous variables such as efficiency of production that have nothing to do with gold.

Many fall back on the fundamental argument for gold and silver. Paper currencies are now being debased recklessly. Every central bank in the world has openly declared its intent to beat down its currency. This is true, paper currencies have been falling for decades. We believe they will all go to their intrinsic value—zero. There’s just one catch, it doesn’t necessarily have to happen tomorrow morning.

So the past gold price doesn’t predict the gold price of the future. Any correlation between the gold price and macroeconomic indicators is temporary. And, we can’t trade gold based on the premise that paper currencies will meet their final fates. So where does this leave us?

We first need a method of measuring current supply and demand fundamentals in the monetary metals. They are quite different from all other commodities, as humanity has been accumulating them for millennia. We discuss our methodology and show our data and reasoning in the full report. In this brief, we will just skip to the bottom line and give our year-end Fundamental Prices for gold and silver.

They are $1,319 for gold and, brace for it, $15.10 for silver. Both of these numbers came up a little in the first weeks of the year, but not enough to change our view of the market as it stands.

That’s the key phrase: as it stands. The supply and demand fundamentals emerge from a dynamic interplay between several kinds of market participants (we describe this in more detail in the full report). At the moment, it’s not showing any signs of major breakouts. There simply is no reason today to back up the truck and load up on gold—much less silver. (If you don’t own any, then our advice is to go buy a little—not for trading but for holding—and don’t worry about the price).

That said, a sea change is coming.

To have any chance of predicting it, we have to understand what drives people to buy gold. We don’t mean what news stories make people hit the buy button on their futures workstation, or buy GLD calls on E-Trade. Speculators, especially those who buy with leverage, cannot create a durable and long-term move higher in price. They are just trying to front-run what they believe will happen, and often end up front-running only each other.

What makes people buy gold coins and bars, and stick them under the mattress for years or decades?

The answer is simple, but a paradigm shift from everything we’ve all been taught in government schools, watched on TV, read in the financial news, and learned in Econ 101. Gold is the only financial asset that is not someone else’s liability. There are plenty of other financial assets; the world is overflowing in paper derived from paper, stacked on top of paper. And every one of them depends on a counterparty servicing the debt and making payments. There are also many tangible assets such as antique cars, real estate, and art work. Every one of them is illiquid in good times, and may be impossible to sell in a crisis.

Gold is unique for these reasons.

Ignoring the speculators, who only buy gold to sell it for a quick gain when the price rises, or to cut losses when the price falls, who buys gold to hold for the long term? What are their motivations?

Based on the price and supply and demand moves so far, it is likely that the price of gold will end the year higher than it ended 2014. However, silver will fall if the speculators currently holding it up give up.

In this annual report, we’re not just trying to look at whether the metals are over- or under-priced. We are trying to predict a change in attitudes. It is not a matter of if, but of when.

We think the sea change is more likely than not to begin in 2015. We don’t use the term “sea change” lightly. The crisis of 2008 was the beginning of a credit collapse. Most market observers believe that the central banks fixed the problem, and have been talking of the “green shoots” and “nascent recovery” and “GDP growth” for years.

It is noteworthy that even the skeptics have accepted that the system will hold together. Most of them have given little thought beyond how to make more dollars. Even gold is just a vehicle to speculate to make dollars. In other words, few have been worrying about default risk. They have focused on inflation, and trading to get a higher rate of return than that.

This means they have not focused on counterparty risk or credit quality. We think this will change in a big way.

At the moment, we see little reason to put a lot of capital in harm’s way betting on a rise in the gold price, much less on silver. But that’s why we reassess the supply and demand fundamentals every week in our Supply and Demand Report. We will report on changes as they occur.

This Monetary Metals Brief 2015 is based on the full Monetary Metals Outlook 2015 report. The full report contains graphs of the monetary metals’ Fundamental Prices for 2014, a fuller discussion of gold, our macroeconomic views including the resent crisis in Switzerland, and our supply and demand theory.