Unions Strike Against You 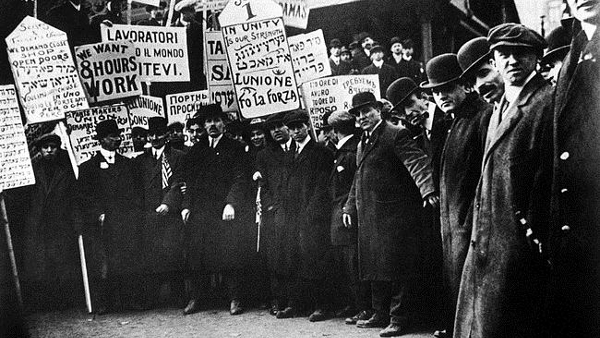 Like all wise consumers, you probably want to get as much value for your money as you can. You want quality products at a good price. Your chief ally in this pursuit is marketplace competition. To compete successfully for your dollar, producers must compete with each other either to increase the quality of their goods and services or else to lower the price of the goods and services they already provide. Either way, you win: better products or better prices. Sometimes you might even get both at once.

But not if unions have their way. When unions go on strike, their intention is for their members to get more — more money, more benefits, more security, or more time off. The inevitable result of getting more is higher prices and (therefore) less competitiveness, at least for the company that gives the union what it wants. Unions never go on strike in order to do more work for less money. When unions succeed in providing more for their members, production costs increase. Whenever unions win, their product becomes less competitive and their company more vulnerable. When unions win, the price of the product they provide goes up. That means you, the consumer, lose. You get less product for the same money, or the same product for more money.

Faced with that prospect, you do what any wise consumer does. You go elsewhere. You hunt for the products of other companies, products whose prices are more competitive. Whenever you are forced by a product’s now higher price or now lower quality to go elsewhere, the members of the union whose tactics drove you to the competitor’s product are forced to go elsewhere also. They go to the unemployment office.

Joblessness is the high price union members sometimes pay when they forget that all workers, including all union workers, work for you, the consumer, and not for management. Managers aren’t the real bosses, and they’re not the real employers. You are. Consumers decide who works and who does not. Consumers decide who gets paid and how much. Consumers — and only consumers — pay the wages. By selecting one product over another, consumers keep companies alive; or consumers close them down. Thus, when a union strikes, it strikes against consumers; it strikes against you. You pay the wages, not management. If unions get more money, they get it from you, or they do not get it at all. In that respect, union job actions are job actions against neighbors and friends, who are the real employers. And when unions get their way, when they get more money and benefits for their members, consumers respond accordingly. They go elsewhere.

More often than not, companies don’t break unions; unions break companies. Unions do the same to governments, which can no longer afford to pay for the concessions its Democratic legislators and executives gave to its union constituents.

We work in a global marketplace. Because of recent technological and transportational advances, a company’s money, data and products can be moved all over the globe, sometimes at the speed of light. Transfers, sales, and transactions of all sorts occur at incredibly high speed over remarkably great distances. Technology now permits the complex and instantaneous integration of material, consumers, management, and labor around the world.

As a result, no longer can there be any truly effective barriers to enormous amounts of foreign competition. No protectionist laws, for example, can prevent the transfer of information, or of electronically transmitted goods and services. Like it or not, American workers and companies must now compete head-to-head with workers and companies everywhere on the globe. It cannot be avoided. American companies and American workers must compete with their counterparts around the world because American consumers can now shop globally. As a result, the more international a company’s competition, product, and market, the more injury unions can do.

Meanwhile, remember that when unions seek more members, they aren’t doing so because union organizers are just a bunch of nice guys who want to help people. They’re out to make a buck. Unions want more dues. If the unions weren’t making a pretty profit from their members’ dues, they’d quit. That’s because unions are a business.

Labor unions are a business. Their business is selling memberships. Memberships can be sold in at least two ways: freely or under coercion. Unions have been known to sell them both ways depending on the laws that obtain in each political jurisdiction.

In places where the law permits, one can choose to accept or to decline union membership, and to do so without penalty. In other places, where the law demands, you must join the union if you wish to work. Occasionally one sees a half-way measure: You need not join the union in order to work, but you still must pay. What you pay goes either to the union or elsewhere, as the case may be. But pay you will, like it or not.

For various reasons, many folks simply do not want union representation. Perhaps they do not like the political purposes to which their dues are put. Perhaps they think that collective bargaining, simply because it is collective, stifles individual excellence and coddles incompetence and sloth. Perhaps they think that union leadership absorbs far too much money for itself and spends far too little for its members. The head of one middle-sized union Michigan, for example, makes nearly half a millions dollars annually, plus expenses — all drawn from union dues. In other words, just as there are multiple reasons to join a union, there are multiple reasons not to.

Therefore, when folks can easily opt out of union membership, they often do. Union membership today is at its lowest percentage in nearly 80 years. The vast majority of American workers do not have it and do not want it. Unions, of course, want that to change. In response to that broadening rejection, unions seek advocates in government who will legislate against that opportunity, against that freedom.   In response to heavy union campaign donations, and in response to the promise of free labor supplied to aid their campaigns, legislators often pass laws that strongly undergird union membership. They put in place procedural mechanisms by which, if the union worker works for the government, the union dues are withheld from paychecks and sent directly by the government to the unions, much like taxes and social security are withheld by the employer and sent to the government. Unions press hard for such laws and mechanisms because, when the payments are made directly by the employer to the unions, membership levels remain much higher. But when members themselves must send in their dues each pay period, memberships slip noticeably. In order to help themselves by helping the unions, legislators pass the laws and put the mechanisms in place that the unions want. In order to stay in office, politicians from one party bow to union demands, just as politicians from the other party do for business.

The situation, on both sides of the aisle, is insidious and militates against prudent legislation, which is already in desperately short supply.