China Market Collapse: The Snowflake Which Triggers the Global Avalanche? 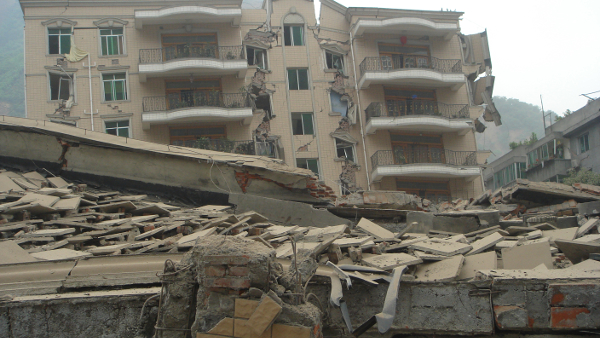 Collapse of a bank in Beichuan Qiang, China

Markets that climb to dizzying heights over extended time periods are known as bulls for a reason: they buck. I titled my book on investing Financial Bull Riding for that reason. A bull has been breaking things in China’s stock market recently, falling as much as 30% from an ascent of 150% over the past year.

The exchanges responded by freezing trading in as many as 50% of issues while the government forbade corporate executives and directors from selling any stock for six months, suspended initial public offering and made more loans available to investors. What does it mean? It certainly doesn’t mean what Bloomberg wrote about it recently:

In China, the invisible hand of the market sometimes needs help from the iron fist of the state. That’s certainly true after a meltdown vaporized $3.5 trillion in the value of shares traded on the Shanghai and Shenzhen exchanges.

The state caused the market to rocket 150% in a year by making cheap credit available to buy stocks in the first place. In addition, investors are rescuing their money from the collapsing real estate market. China has dozens of new ghost towns because for decades the state limited where citizens could invest their savings, leaving them with real estate as the only good option. Prices in real estate have been falling recently, so when the state opened stock exchanges much of the real estate money went into them.

At the same time, the state-controlled media urged individuals to buy into the market. Not only did the state contribute to the markets meteoric rise, it tied the reputation of its policies to market success, according to Bloomberg:

“This is a real testing moment for the leadership,” says Zhao Xijun, deputy dean of Renmin University’s School of Finance. “The evaporation of fortunes of more than 80 million individual investors would pose unthinkable social problems for the country.”

And while the market is $3.5 trillion lower than its peak, that doesn’t mean the economy is poorer by that amount. The stock market is a zero sum game. For every loser of a dollar someone has gained a dollar.

The recent rise and drop in China’s market is not very different from the US market in the late 1990s that enjoyed the dot.com bubble in which PE ratios lost their sanity and then went bust.

A stock market cannot climb 150% in a year without massive credit expansion by the state. But as Mises explained in Human Action, the money supply must grow at exponential rates in order to keep the bubble from collapsing. Chinese authorities probably didn’t know that, in spite of the popularity of Austrian economics at many Chinese universities.

Stock markets provide insight into the expectations of others about the future and help coordinate business plans, according to the great Austrian economist Ludwig Lachmann. A collapse like that seen in China lately shows that many business people are growing skeptical about the future of China’s economy.