Prime Minister Tsipras, Here’s How To Create a New Golden Age for Greece 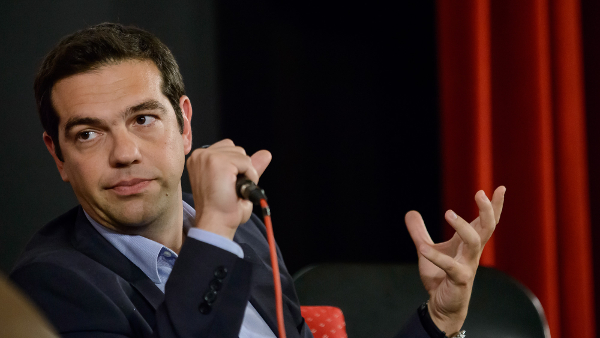 First, congratulations for mustering the popular support to say “no” to the troika. The euro has long offered Greece a perverse incentive to borrow, and now your country is trapped in debt. By any conventional means, Greece cannot repay (I propose an unconventional way, below). The sooner everyone acknowledges this simple fact the better.

While I don’t claim to know why you agreed to a bailout deal this weekend, I can guess. The troika threatened to maximize the costs of leaving the euro. They can shut off access to further credit; including the Emergency Liquidity Assistance, European Stability Mechanism loans, liability transfers via TARGET2, and bond buying programs. They could do more, such as refuse to clear payments to and from Greece.

That would utterly destroy the Greek banking system. In turn, that will wipe out all Greek savers and employers who haven’t already transferred their bank balances out of the country. Defaults of all euro denominated liabilities will cascade throughout Greece, including insurance, annuities, corporate bonds, business credit lines, personal loans, and mortgages. Every liability is someone else’s asset, and few creditors would survive. The government will collapse when no one can pay taxes. Greece will end, a failed state.

The troika wants you to accept another bailout deal, to service Greek debts a while longer. Since bailouts mean borrowing more, you cannot avoid default in the end. Going deeper into debt is no good for anyone.

Should you choose to default instead, you will not be able to continue using the euro. Even if the troika doesn’t immediately act, the threat is real. No one would lend to the Greek government, or even businesses, with that Sword of Damocles hanging over you. However, you need outside capital to restart production and trade. Otherwise, your industries will be shuttered, even including exports.

Some economists advise you to create a currency board. This is a new monetary authority that maintains a fixed exchange rate, by holding euros and issuing Greek currency. It’s nothing more than using the euro, though indirectly. It has all of the flaws and risks I just described.

Greece has no future, so long as it clings to the euro.

Adopting the dollar might seem less bad. At least, the Federal Reserve isn’t likely to stop you. Greek businesses and banks could even attract some dollar-based credit. Once you leave the euro, Greeks will probably end up using the dollar, with or without legal tender law. What a wasted opportunity.

You could create a new drachma and redenominate all debts in the currency. Lamentably, even Nigel Farage offered you this advice at the European Parliament. It’s tempting to think that Greece can just print its way out of debt, but it’s a trap. Don’t do it.

It’s obvious that the purpose of a new drachma is to fall. No one outside Greece will hold it. Few Greeks will hold it either, so the drachma will not find a bid. It may get you out of debt, but at the cost of the further destruction of businesses and jobs. Greece will become the next Zimbabwe.

You can’t stay with the euro. Switching to the dollar isn’t much of a move forward. Imposing a new drachma will only harm the long-suffering Greek people. By the logic of Aristotle, that leaves one other option. Adopt gold as money.

You have an historic opportunity to create another golden age for Greece.

Begin by allowing the Greek people to use gold, free from legal tender laws and taxes on gold. Your people will begin accumulating savings again, which they desperately need to rebuild businesses. And speaking of building businesses, if you want to attract capital from the rest of the world, gold will do it like nothing else. Dollar denominated bonds will attract tepid investment, at best. With gold bonds, Greece can raise unlimited amounts. At least it can get as much honest credit as it needs. Honest means that the borrower has the means and intent to repay. It means credit is financing productive enterprise that generates income to amortize the debt.

I said that no conventional approach will let Greece get out of debt. Let me briefly outline an approach to use gold to get out of debt without default or hyperinflation (I refer you to my paper, an entry to the 2012 Wolfson Prize, for the full explanation).

These are not conventional bonds backed or collateralized with gold, but bonds that have the principal and interest denominated and paid in gold. There is one twist. Buyers don’t pay in euros, or any paper currency. Instead, they pay by redeeming outstanding Greek bonds. For example, to buy a 1000oz gold bond, a bidder might be willing to bring you €500,000 worth of existing Greek government bonds.

This is the only mechanism that lets Greece get out of debt cleanly.

Greece will exploit a rising euro to gold exchange rate (i.e. gold price). With each new tranche issued, the price of gold will be higher. It will take less gold to retire more debt. And believe me, the gold price will begin rising once the markets realize that gold is being remonetized. Greece will be the first country, the leader, in using gold bonds to avert financial Armageddon. Many others will follow.

With each new tranche, the paper bond to gold bond exchange rate will also be rising. As buyers realize that the value of gold does not erode, they will prefer a future gold payment to one in a paper currency. Gold bonds will sell for a premium over the gold price, compared to paper bonds. This premium will rise.

You will find that the market will happily buy long term bonds, giving you the opportunity to pay off your debt without having to constantly roll short-term liabilities.

If you can buy the time to let this strategy play out, you will get out of debt completely, avoid default, and end with the best credit rating. You will immediately attract capital, and then industry, and jobs to Greece.

At this point, Mr. Tsipras, you have nothing to lose. Why not win the future?