America: Not a Nation, But a Confederation Under God 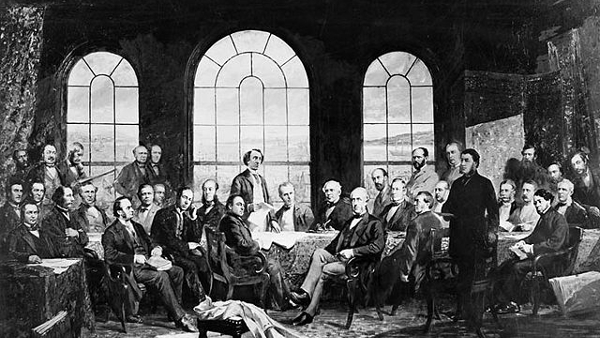 This confederation of nation-States would be bound together under a compactual agreement or covenant which would not form a new nation, although specific elements of a nation-state would be brought to bear;[1] but a confederacy of free and independent nation-States. This league of republics, formerly the Colonies, would be derived, in part, by the observations of Charles de Montesquieu, and his very practical historical observations.[2]

In Federalist 9, Alexander Hamilton writes in regard to Montesquieu’s views that

“The utility of a Confederacy, as well to suppress faction and to guard the internal tranquility of States, as to increase their external force and security, is in reality not a new idea. It has been practiced upon in different countries and ages, and has received the sanction of the most approved writers on the subjects of politics.”

He goes on to refer to the newly envisioned confederacy as “a general Union of the States” and then in bold force as a “CONFEDERATE REPUBLIC.”[3] And finally at the end of Federalist 9 quoting Montesquieu directly in reference to a “Confederate Republic,”[4] and recognizing the current state of the confederacy as a collection of republics which each “enjoys the internal happiness of each.”[5] The objective of which is, while enlarging the role and even power of the federal government, to completely maintain the sovereign individualism of each separate republican State. Upon the emergence of this new Union, the great colonial Pastor James Dana would call it, in a sermon, an “American Confederacy” and a “confederacy between free states.”[6]

In 1788 Pastor Samuel Langdon preached wisdom which resonates to this very day which righteously warns,

“Do not let openly irreligious and immoral men become your legislators. How can you expect good laws to be made by men who have no fear of God before their eyes, and who boldly trample the authority of His commends?”

Langdon is foretelling that ungodly men will make ungodly laws – that is laws which are not held to the standard of Natural Law and His word. We are witness to this very prophesy today in the United States. “Will not,” continues Langdon, “the example of their impiety and immorality defeat the efficacy of the best laws which can be made in favor of religion and virtue? If the legislative body is corrupt, you will soon have bad men for counselors, corrupt judges, unqualified justices, and officers in every department who will dishonor their stations.”[7] We are watching before our very eyes Langdon’s forewarning unfold and the dismissal and dismantling of the standard of the law. We have become a nation of men, not of laws. “We must obey God rather than men!”[8]

Pastor James Dana in 1779 just after the forming of our Union made a similar prophecy and warning. “May we never see the time in this Christian State,” orates Dana, acknowledging the Union as a center of Christiandom, “when the contemnors of a religion so beneficial to communities shall be possessed of public trust. This would be to advance men who publicly insult their country, and the cities of our God; who defame the brightest character that ever appeared in human form, the friend of all mankind, God manifest in the flesh.”[9] The colonial clergy of the Union understand that those against the Christian foundation of America would work to destroy it from the inside-out.

[2] For the immense study of governmental history see Charles de Montesquieu, 1748, The Spirit of the Laws.