It has now been two weeks since the first Republican Presidential debate, and opinion polls are now being released. The changes in the past two weeks have been predictable: Donald Trump rises, Jeb Bush falls, and previously-unknowns such as John Kasich are now actually showing up in polls. What is more interesting are the changes seen in the political betting markets. 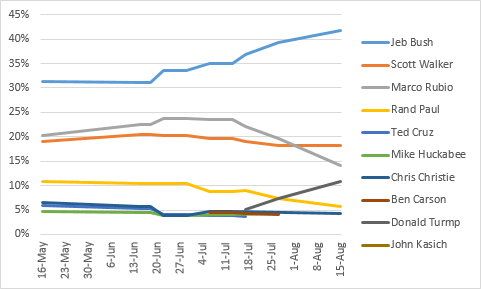 This chart shows the averaged probability from over a dozen political betting markets that have assigned to the various Republican candidates since May 16th, 2015.

One of the more interesting changes is the rise of Jeb Bush. Opinion polls show a sizable decline in his favorability among Republican voters, but in the eyes of political bettors, his debate performance increased his already high chances of winning the nomination. Jeb’s performance in the debate was relatively inoffensive. He didn’t say much, and what he said wasn’t particularly controversial, which does not win support in the early stages of an election. 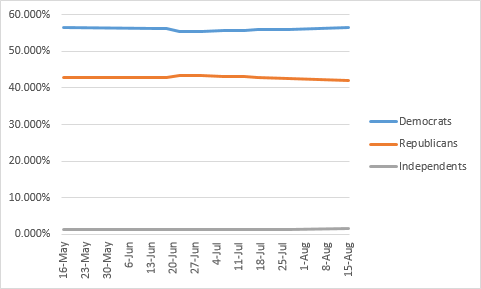 This chart shows the probability of a Democrat or Republican candidate winning the Presidency. 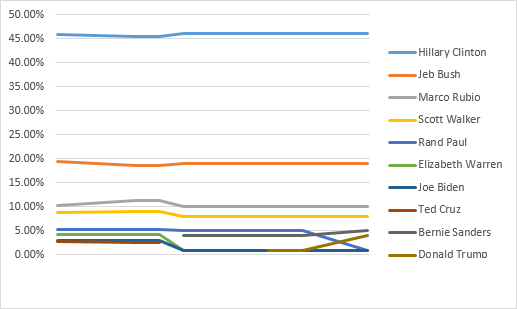 This chart shows the probability of an individual candidate winning the Presidency.

The debate had little influence in the chances of the top 4 candidates in the general election. Hillary, Jeb, Rubio, and Walker were essentially unaffected. The non-establishment candidates had more variance, with Rand Paul’s chances falling considerably, Donald Trump’s going up from just under 1% to 4%, and Joe Biden disappearing from the top 8.

While the debate did have a large impact on the candidates standing in opinion polls, it did not have the same effect on political bettors. There were slight changes, but it was mostly a continuation of trends that have been present for weeks: Donald Trump and Jeb Bush rising, pushing the non-establishment candidates out of the spotlight.