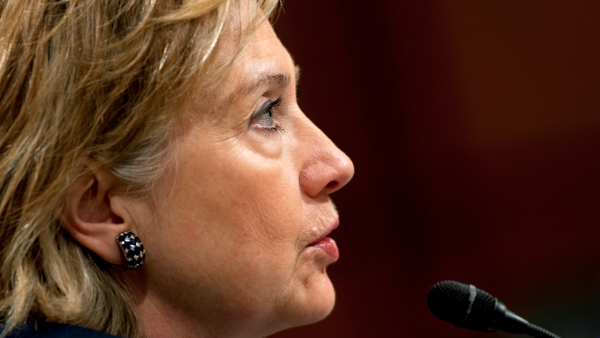 Hillary Clinton’s presidential campaign has been experiencing what many political analysts are describing as an “implosion” over the past several weeks. The combination of her inability to defend herself over the email scandal, and Bernie Sanders’ becoming a serious candidate, has cast doubt over what was once considered a foregone conclusion: that Hillary would sweep the nomination, and then the presidency, without much difficulty. But have the political betting markets reflected that sentiment?

To briefly summarize the political betting markets: they are websites, primarily based in the United Kingdom, that allow people to bet on the outcome of political events. We go to these websites, and take the average odds bettors assign to certain political events, and then convert those odds into a percentage probability.

As for Hillary, the odds of her winning the Democratic nomination have taken a non-marginal hit in recent weeks. 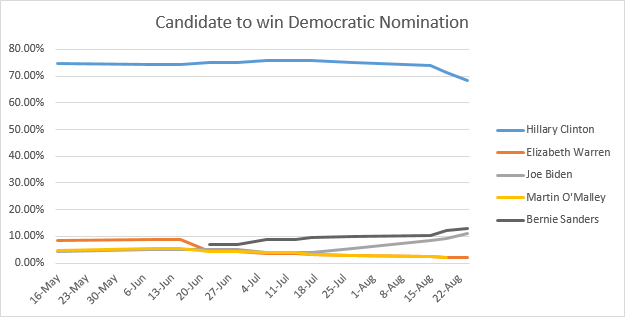 For the four months that we’ve been tracking it, Hillary has consistently been around a 75% probability to win the Democratic nomination. Since early August, however, she has dropped from 74% to 68%.

While she is still by far the favorite to win the nomination, she is beginning to run into some competition from Bernie Sanders – and perhaps, if he chooses to run, Joe Biden. 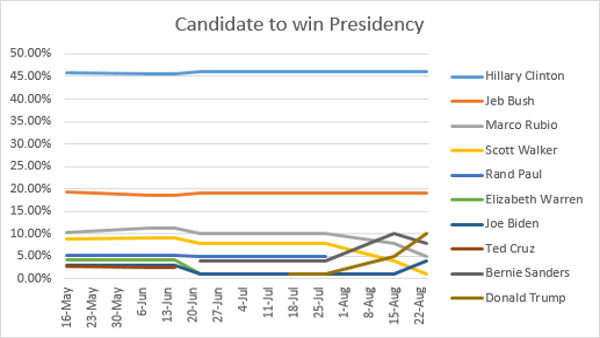 The odds of her winning the general election have been unaffected by the campaign “implosion” of the past several weeks. There are several possible explanations for this. For instance, Trump’s rise; if he does somehow win the nomination, the probability of him winning the general election is still very low, whereas a less divisive candidate would be in a much better position to court moderate swing voters.

Hillary’s odds of winning the nomination have indeed been hurt, but her odds of winning the presidency are basically unchanged. Whether that continue to be the case might very well depend on if the public loses interest in the email scandal before the first Democratic primary debate.