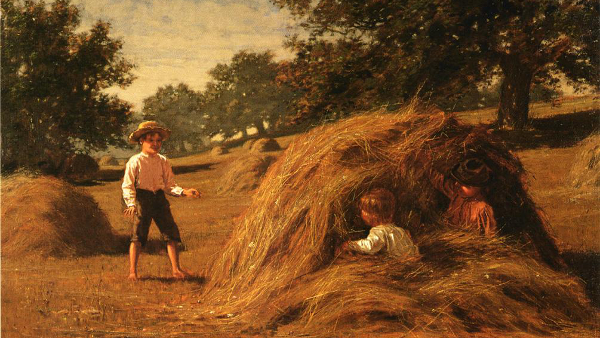 Hiding in the Haycocks (by William Bliss Baker) (1881)

“I am in the midst of lions; I am forced to dwell among ravenous beasts— men whose teeth are spears and arrows, whose tongues are sharp swords”

Many of the psalms express the psalmists’ struggles to live a righteous life in the midst of evil people. These writers knew they could not withdraw from the world, but had to live for God in the midst of it, while trusting the Lord for protection and vindication of their faith lifestyle. Yet often God’s people have taken themselves out of the world, sometimes by being in church often (if not always), and at times by cloistering themselves away so as not to have contact with this rough-and-tumble world. Jesus addressed this tension when He said,

How are you doing as you live in this world as a pilgrim? Have you withdrawn into your own world? Have you isolated yourself, or do you trust God for protection while you serve as His agent of reconciliation and hope? Can you see that God loves this world and wants you to love it while not being of it?