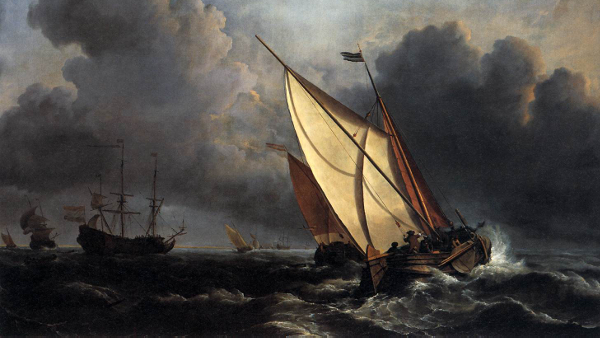 The Lord is all powerful over nature and if He is powerful over nature, He can and is also over mankind. These verses cause one to reflect not only on the Flood, over which the Lord presided with complete authority, but also on the incidents on the Sea of Galilee where the Lord demonstrated again and again that He was in control of His own creation:

“After he had dismissed them, he went up on a mountainside by himself to pray. Later that night, he was there alone, and the boat was already a considerable distance from land, buffeted by the waves because the wind was against it. Shortly before dawn Jesus went out to them, walking on the lake. When the disciples saw him walking on the lake, they were terrified. ‘It’s a ghost,’ they said, and cried out in fear. But Jesus immediately said to them: ‘Take courage! It is I. Don’t be afraid'”

Is there a storm in your life, and are you afraid? Then picture Jesus walking in the midst of your tempest, calm and in complete control. Then hear Him saying to you what He said to the disciples, “Fear not!” After that, decide to put your trust in His power that is so beautifully described in today’s passage.