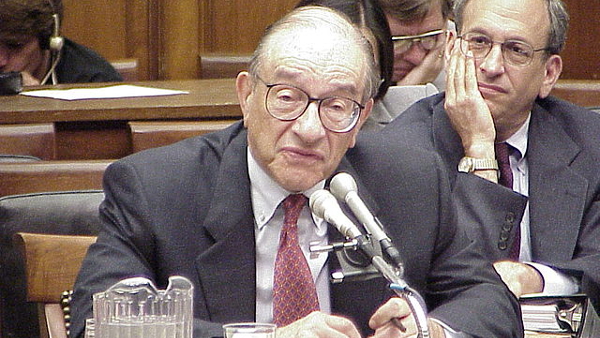 The government reported recently that productivity in the US rose 1.3% from the last quarter, but that was little comfort to the Maestro, Alan Greenspan, who is worried about the collapse in productivity. Investors should be worried as well. StreetInsider.com reported Greenspan saying:

I think it’s the most serious problem that confronts not only the United States but the world at large and more exactly the developed world especially. American productivity is not significantly different from zero growth in the last 6 or 8 quarters. And the cause of that, if you work backwards through the causative chain is capital investment has been inadequate to fund the amount of assets that you need.

The interviewer, Tom Keene responded with

“There was a moment when we were bewildered by why nation’s productivity was so good and America running on all cylinders. It is a distant memory.”

Rising profits means relatively lower wages from the perspective of an entrepreneur. Another way of saying the same thing is that owners of consumer goods companies get more profit per employee, so wages are cheaper for him in relation to profits. Naturally, the owner will want to hire more of these “cheaper” laborers to produce more output. He won’t buy more equipment to increase his output because the turnover in such long term investments is much lower and therefore the profits are lower.

Hayek explained the many ways in which business owners will use more labor. A common way is to have employees work overtime or add extra shifts. If near capacity, businesses will often bring out of storage much older and less efficient equipment to boost production. Or owners might buy equipment that is lower in quality, lasts a much shorter time and is cheaper.

Business owners care about productivity only to the degree that it increases profits. When profits fall and wages are expensive relative to profits, business owners will reduce labor and buy equipment.

The recent collapse in productivity has happened because businesses have cut their capital expenditure budgets to the bone in favor of using more labor. That boosts employment but shrinks productivity. It is one of the signs of the end of the expansion and the onset of a recession. And since the stock market dances in step with the business cycle, it signals the end of the recent bull market.

For readers still skeptical about Hayek’s Ricardo Effect, Google for “Hayek’s Ricardo effect: a second look,” by Laurence Moss of Babson College and Karen Vaugh of George Mason University. It appeared in the journal History of Political Economy, 18:4, in 1986. The authors show that Hayek was right to claim that his critics misunderstood his theory. I think Hayek was being his usual generous self, something no one could accuse Hayek’s critics of suffering from. His critics, including Kaldor, Hawtry and Hicks, were deliberately obtuse and Knight was rude. They argued from the assumptions of perfect competition and equilibrium knowing full well that Hayek was explaining a dynamic economy. Lucas and neoclassical economics partially vindicated Hayek.

In the same interview, Greenspan explained the origin of interest: