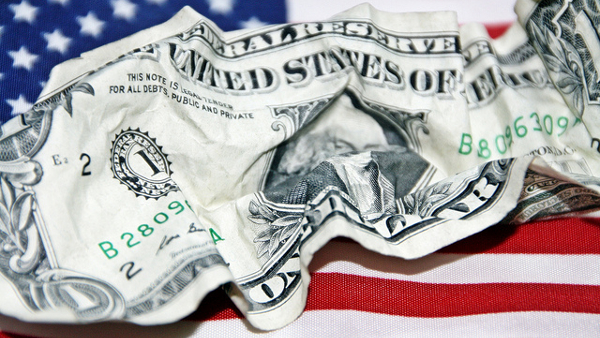 The timing of this pronouncement is pretty strange given how strong the dollar actually is at present in world markets. And the threat is a very serious one as losing reserve currency status has been described as something that would be very painful for America. As we discussed in the last post, it seems as if only Russia and ISIS believe the dollar might collapse anytime soon (although the Chinese have been calling for the death of the dollar since at least 2013).

What could possibly trigger such a collapse? The answer provided by two Cabinet-level officers:

They say: Not Approving the Iran Nuclear Agreement would destroy the dollar.

First, the Secretary of State, as shown in this YouTube.

Basically, his argument is that the rest of the world has already adopted the removal of sanctions. So, if we don’t approve the deal as written, we will be forced to sanction our allies for doing business in Iran. They will revolt and dump the dollar. From Reuters:

Dollar could suffer if U.S. walks away from Iran deal: John Kerry

NEW YORK (Reuters) – If the United States walks away from the nuclear deal with Iran and demands that its allies comply with U.S. sanctions, a loss of confidence in U.S. leadership could threaten the dollar’s position as the world’s reserve currency, the top U.S. diplomat said on Tuesday.

“If we turn around and nix the deal and then tell them, ‘You’re going to have to obey our rules and sanctions anyway,’ that is a recipe, very quickly … for the American dollar to cease to be the reserve currency of the world,” U.S. Secretary of State John Kerry said at a Reuters Newsmaker event…. [To CONTINUE Reading at Reuters…]

And now, the Treasury Secretary as he opined in The New York Times on August 13th:

The High Price of Rejecting the Iran Deal

“…Instead of toughening the sanctions, a decision by Congress to unilaterally reject the deal would end a decade of isolation of Iran and put the United States at odds with the rest of the world.

Some critics nevertheless argue that we can force the hands of these countries by imposing powerful secondary sanctions against those that refuse to follow our lead.

But that would be a disaster. The countries whose cooperation we need — including those in the European Union, China, Japan, India and South Korea, as well as the companies and banks that handle their oil purchases and hold foreign reserves — are among the largest economies in the world. If we were to cut them off from the American dollar and our financial system, we would set off extensive financial hemorrhaging, not just in our partner countries but in the United States as well….”
[To READ the entire Op-Ed at NYT…]

The threat was obvious and The Wall Street Journal picked up on it. So did Russia Today. Ironically, a few months earlier, an Investor’s Business Daily Opinion piece made a case that passing the Iran deal might destroy the dollar as it would alienate critical allies in the Middle East who have kept the petrodollar as the currency of choice for oil. Looks like we lose no matter what.

As for whether or not we should go forward with the Iran nuclear agreement, consider these thoughts from Fred Fleitz (former CIA Senior Analyst), Clare Lopez (former CIA Operative) and Frank Gaffney (former Assistant Secretary of Defense) of The Center for Security Policy who have made a strong case AGAINST:

Obama’s Iran Deal Is the Opposite of What He Promised the American People (National Review, July 14, 2015)

How the Iran deal violates the Constitution (The Hill, August 11, 2015)

Vote of no confidence on Obamabomb deal (Washington Times, August 11, 2015)

When you review these articles, you quickly realize that the deal as listed would allow the Iranians to fund terrorism to the tune of $100 billion or more. This is money that can be used for Jihad. This isn’t rhetoric. Obama officials have admitted as much.

And we know that Iran has extensive Cyber-Economic Warfare plans to wage against America. More than $100 or $150 billion would certainly be a powerful weapon. Tom Hutchinson declared that this deal may be the “building blocks of World War 3.” And don’t forget that the Iranian leadership and many Iranian people have continued to threaten: Death to America.

Basically, what we have is a no-win situation if you accept all of this at face value. But before we conclude that we are doomed, do we really accept the threat that if Congress uses its Constitutional authority to override the President the dollar dies?

Or is that a serious hyperbolic threat designed to force Congress to conform?

Even worse, is the Administration looking for a scapegoat to blame because they expect a dollar collapse?

When you take into account all the parties either aiming to destroy the dollar, calling for its demise, or just warning about its collapse, these become serious questions. Especially given the timing. That’s why we continue to recommend that all readers develop a Game Plan. The ride certainly will be interesting.