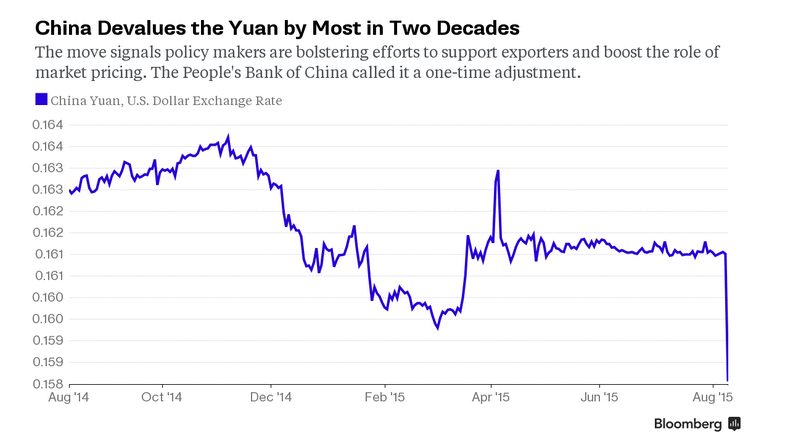 Last week China shocked traders with a surprise devaluation of the Yuan, sparking fears of a currency war. Many had believed that September would begin a move to make the Chinese Yuan the primary reserve currency for the world, displacing the dollar. Imagine the shock when the Yuan fell against the value of the dollar.

It has been more than a year since the dollar was supposed to be doomed with the implementation of FATCA (the Foreign Asset Tax Compliance Act). There were hundreds of predictions that “the dollar will die” on July 1, 2014. Of course it didn’t. In fact it strengthened dramatically as the chart from the Federal Reserve shows. 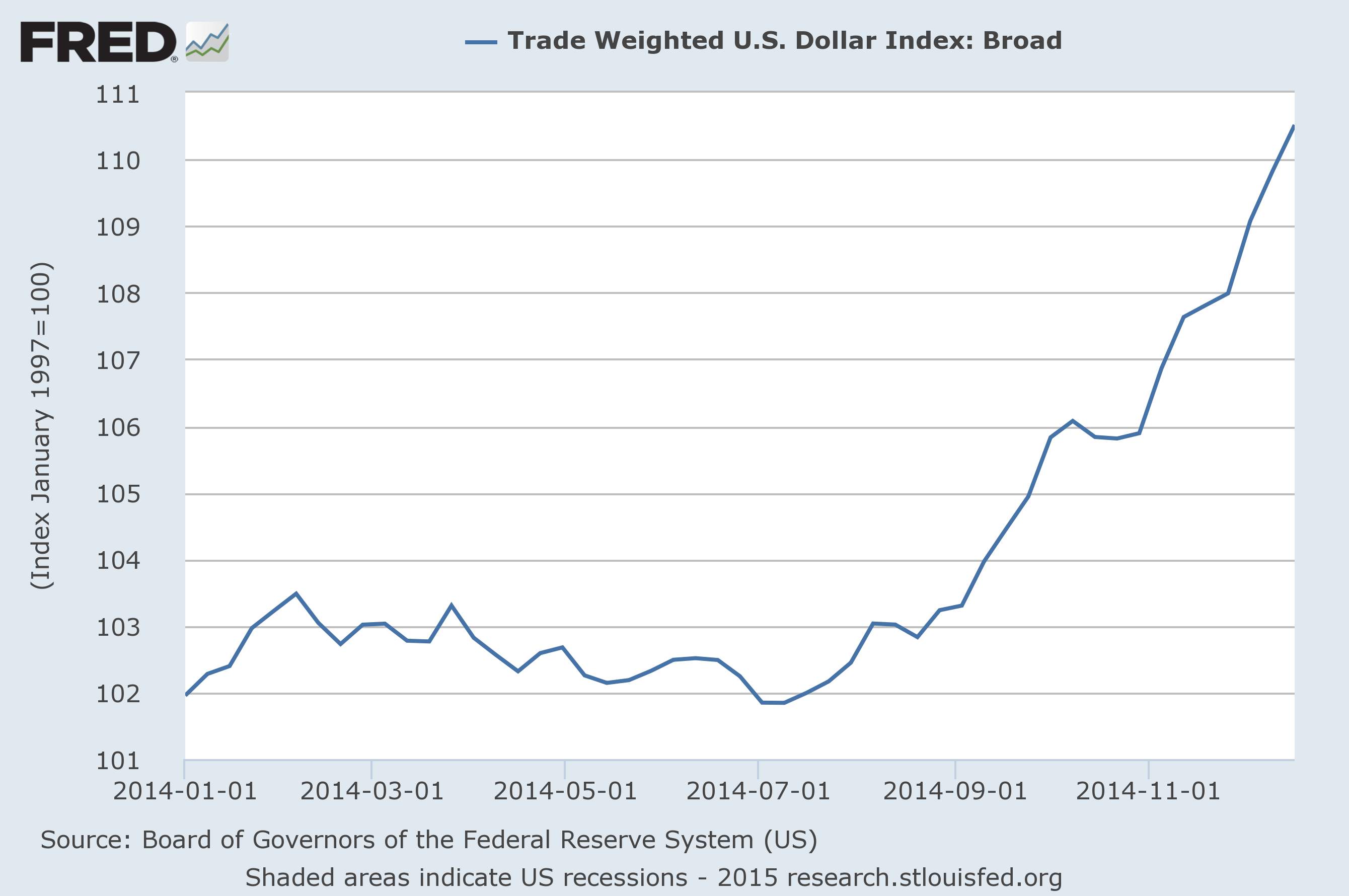 The next “death of the dollar” prediction stated that the IMF (International Monetary Fund) would soon include the Chinese Yuan in its Special Drawing Rights (SDRs) sometime between September and October of this year. Yuan “in” and dollar diminished if not destroyed. So, it was a surprise to many when the IMF declared that the Chinese currency simply wasn’t ready. For several years, Russia had been pushing China to internationalize their currency and take on the dollar directly. In 2013, finally, the Chinese agreed to join in the effort. All of a sudden there was a burst of activity intended to replace Western financial institutions (ironically including the IMF) with non-American versions. And, these efforts enjoyed great success, even attracting the support of America’s top allies. The culmination of these efforts was expected to be a bowing of the IMF to China. Except it didn’t happen… or at least not yet.

China’s problem is that its economic model has begun to falter. Massive infrastructure development financed by an orgy of debt is not sustainable. China has been attempting to transition from an exporter to a domestic consumer economy. The only problem has been that the miracle of rapid growth has rapidly disappeared. Debt problems began to pile up and it seemed the only quick solution was a reshaping of the global financial system. As the Chinese have noted, the United States carries a huge Federal Debt with seeming ease because the dollar is the reigning reserve currency. If the Yuan held that position, they believed that Chinese debt could be internationalized with little consequence and the bonus would be America taken down several notches.

The first problem occurred when China’s reported gold holdings were less than expected. Either the Chinese were sandbagging by under-reporting or the Chinese economic struggles had forced at least a temporary side-lining of the gold acquisition strategy. Either way, the reaction was negative and this exacerbated the Chinese stock market collapse. The Chinese responded by accusing us of using economic weapons to crash their market. As we have long noted, the Chinese are the ones to officially announce that a “stock market crash” was a weapon of Unrestricted Warfare.

It should be noted that China also recently dumped a huge amount of U.S. Treasury bonds (shocking even Goldman Sachs). Perhaps they did so to shore up their economy. Some might argue they were preparing for a dollar collapse or even attempting to cause one as senior Communist Party officials argued they should do in 2011. Regardless, the dumping of Treasury Bonds was jaw-dropping, to say the least. You can see the impact in the dramatic decline in Chinese FX (foreign currency) reserves. 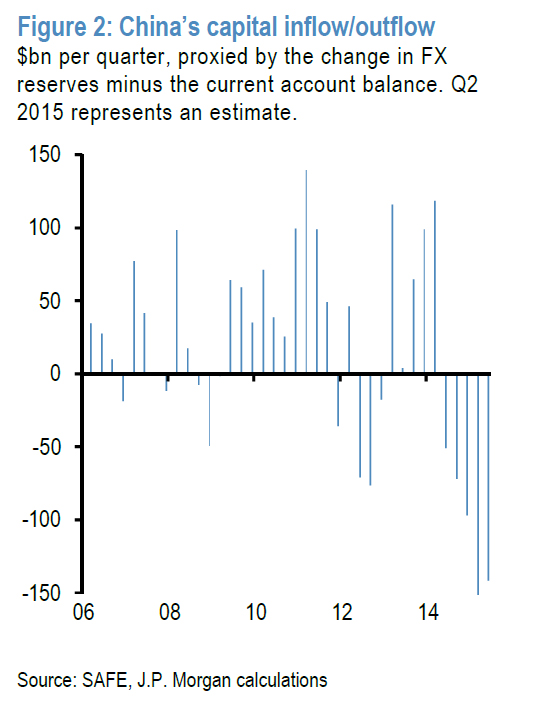 When, the IMF said “not ready” to the Yuan, China had to consider another path to their longer-term goal.

There are a couple of things to keep in mind. First, stability is concern number one for the ruling Communist Party. They have to keep the people happy enough to not turn against the government. Second, China is not monolithic. The business community, the military (PLA, or People’s Liberation Army), and the ruling Party all have differing agendas that can often conflict with one another.

The business community has wanted a weaker currency as this promotes exports and market share. The PLA has pushed for a stronger Yuan so China could assume global leadership and topple America. The Communist Party was split, only recently siding with Putin in a willingness to take on America. [Remember that in 2008, China rejected Putin’s offer to work together in taking down America.]

It is important to note that the IMF did not say “never” to China. They simply said “not now.” They promised a revisit and possible inclusion as early as September 2016. And one of the excuses for saying “not now” was that the Yuan had been so tightly controlled and not allowed to free float. In this case, a free float meant the currency would decline, at least initially.

What this meant was that last week, the pro-reserve currency supporters were willing to let the currency fall temporarily if it aided in gaining IMF approval next September. Likewise, the business community successfully argued that a declining currency might help restart the economy. As a result, two sides that once were at odds came together, sparking a currency adjustment and shocking the world.

Frank Gaffney of Secure Freedom Radio interviewed me regarding this issue this week and the podcast can be heard here.

Many people believe that a new round of currency war began last week and they may be right. This would be a series of ongoing devaluations and retaliations creating a deflationary spiral and “beggar thy neighbor” policies. If currency wars take hold, there will be many more economic dislocations we will have to address, including a dollar that gets so strong that some argue it could collapse American growth. That’s something we are monitoring closely and will have to address in a future. We do not believe, however, that a stronger dollar is a long-term Chinese-led strategy as it would not breed stability. It is more a chaotic result of too much debt around the world and the repercussions are extremely serious. Even if the Chinese were to reluctantly join the currency war, the ultimate end would not be to their benefit. While we may have to face the deflationary consequences (and they would be severe), it is not a certainty.

For now, it is important to understand that last week’s Chinese action does not signal victory for the dollar or global stability for the long term. Nor does it suggest that the Chinese have abandoned a strategy to coordinate with Putin in displacing the dollar and usurping global economic authority. The Chinese, especially the PLA, continue to wage cyber-economic warfare. The hacking continues unabated and global economic moves remain concerning as shown in this NSA map of more than 600 successful cyber attacks on America by China in just the past five years. And those are simply the ones we know about and have been made public. 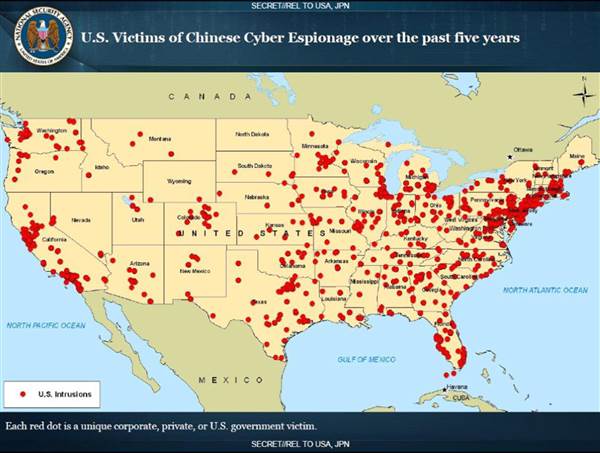 When I wrote Game Plan: How to Protect Yourself From the Coming Cyber-Economic Attack, I tried to make it clear that multiple outcomes were possible. One could be a direct assault on the dollar, sparking a collapse in our currency and hyperinflation. Another might be a currency war with a devastating deflationary spiral. Both remain on the table and only time will tell if either or another outcome prevails. But the way to protect yourself can be polar opposite, depending on what actually happens. The book covers the implications of both deflation and currency collapse with strategies to address then both. That’s why a Game Plan is necessary. You have to know how to respond to different types of attack.

The keys are 1) to pay close attention, 2) be open-minded, and 3) be flexible in responding. Those who bet everything that the Yuan would be the new reserve currency starting next month can really appreciate the need for flexibility. Same for those who bought into the idea that the dollar would die June 30,2014. This does not mean that the dollar is out of the woods, however, as we will explain in our next post about Iran. It is getting very complicated and treacherous.