The American Colonial Clergy: We Must Be a Christian State 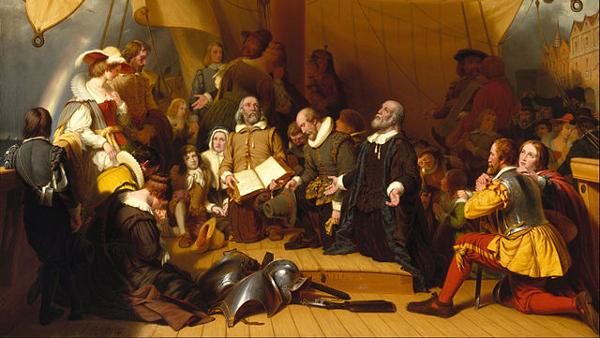 The Embarkation of the Pilgrims (Painted by Robert Walter Weir) (1857)

Thirty-four years prior to the American Revolution, Massachusetts Pastor Nathaniel Appleton, in 1742, would orate an brilliant description of exactly what the American civil government was – whether pre-Revolution or post-revolution – as he and so many other Colonial clergy (like Roger Williams, founder of Rhode Island) clarified the proper role and Biblical alignment of civil government. Tying American civil government to the ancient Hebrews, Scripture, truth and justice, God’s Law, and God as King, Appleton states:

Granted, our government is not a theocracy, and we are not under the divine government so directly and immediately as the Jews were. We are not under the laws of Moses – neither the ceremonial nor the judicial laws – as they were. The laws and statutes that were calculated for that people in their particular and peculiar state are not obligatory upon us, nor are they to be looked at as necessary rules of government. Nevertheless, these judicial laws of the Israelite nation that are so founded upon the general principles of truth and justice as to suit every form of civil government – these are to be regarded as the Laws of God, and binding upon us as much as upon them. This is not because they were given to them, but from the justice and goodness of them in themselves. Upon that account, they are to be adopted into every constitution of civil government…The nature of these laws is not altered, nor our obligation to keep them weakened, by length of time or changes in circumstances. They are founded upon truth, justice, and goodness, and thus are as immovable as the mountains and immutable as God Himself.[1]

The American die is cast and is perpetual and incontrovertible. Not a living constitution, but from a loving and living God.

History has always proven that governments work toward increasing their own power and decreasing the individual’s liberty. The Founders understood this in principle, practice, and from history, and Colonial Minister James Dana warned in 1779, “You cannot have too jealous an eye on tyranny under every form; nor can your zeal be better employed than against the means of it.”[2]

This colonial view arose beginning with the Pilgrims at Plymouth and the Puritans of Massachusetts colony set the tone for Colonial America; albeit through strife, turmoil, and often strong disagreement (as noted below with Roger Williams). This faith forged the path which would lead to the Declarational and Constitutional generations and the building of a new type of society, but based completely on ideas which linked back directly to the church pulpits for the past 150 years. Yet, they forged forward with not just a philosophy, but a building of practice in their lives, churches, and polity; a force which propelled their conscience of theology directly into their governance. No government without a standard of God was not only ungodly, but doomed to destroy liberty and ultimately society. This very value, belief, and practice is perfectly and concisely articulated by Connecticut Pastor James Dana when he declared in 1779 Election Sermon that “a government which gives due encouragement to schools and public worship hath every way the advantage over one that neglects them in regard to civil order and happiness.”[3]

But Pastor Dana would also give a prophetical warning to this newly established confederacy on the dangers of separating the state and the church. “I see profusion and luxury coming in like a flood, corruption and bribery invading all ranks,” warns Reverend Dana, “public measures carried by influences, houses of worship forsaken, or frequented only by a few, the public support of religion withheld and its ministers despised, the Lord’s day devoted to amusements, family devotion almost universally laid aside, revealed religion generally disbelieved, the present infamy wiped off from the vices of intemperance and uncleanness, our children early taught to set their mouths against the heavens, personal revenge demanded for an inadvertent speech or little dignity.”[4] Dana foresaw the raise of the collective progressives of the 20th and 21st century as the United States has and is directly and personally witnessing. He saw the Light diminishing without a pious people being perpetually diligent and the faith of the people underpinning the civil government and their own virtue. “We may not suddenly, but gradually, reach this pitch of degeneracy,“ foretells Dana, “Could we persuade the rising generation to remember our fears and struggle – Could we make posterity feel the distresses we endure to establish freedom, virtue and religion – Could we speak to future times, and make them shun the vices which have ruined other states.” [5] Let us return to the fire forged by our Forefathers and Founding Fathers. The fire of God’s Light.