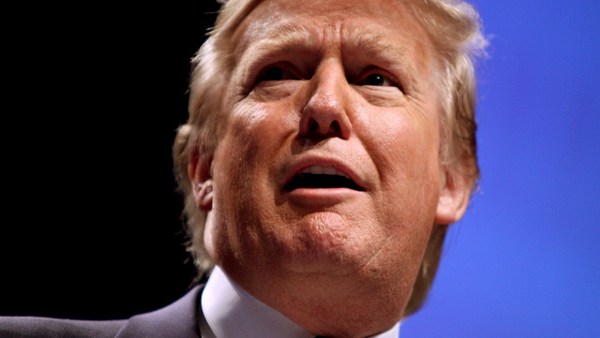 Donald Trump’s rise has certainly disrupted the race for the Republican nomination, but what sort of impact will his rise have on the general election?

In basic terms, Donald Trump’s presence helps the Democrats in the same way it helps Jeb Bush: by sucking up all of the attention that would otherwise be given to Republican candidates.

This chart shows the average probability political bettors assign to the outcome of the 2016 presidential election. It’s dated for July 6th, just before Donald Trump became a popular candidate. 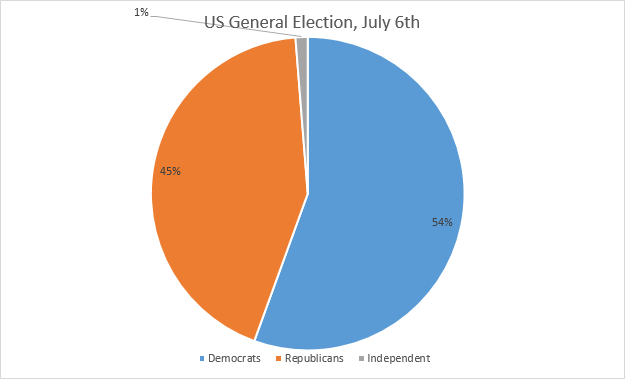 This next chart is dated for July 27th, well into Donald Trump’s actual candidacy. 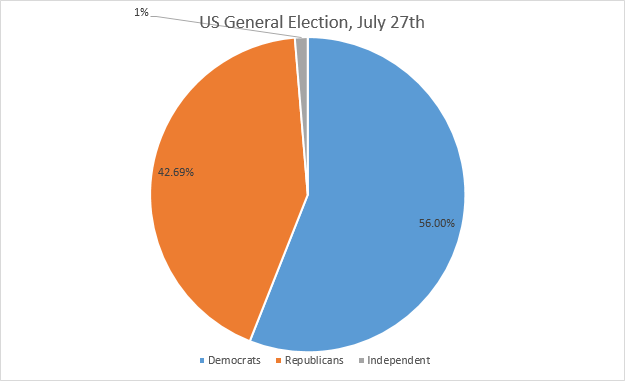 Since Donald Trump’s rise, the probability of a Democrat candidate winning the general election has jumped 2 points.

The reason for this is simple: Donald Trump’s never-ending series of controversial statements that seem deliberately provocative, absorb media attention for Republicans. Other Republican candidates cannot get the attention they deserve because Donald Trump is eccentric enough to get constant media coverage.

He also tarnishes the reputation of the party as a whole in the eyes of the moderate, swing-voters. A moderate voter, the kind who would be willing to vote for either Republican or Democrat in the general election, might think far less of the Republican Party as a whole, if Donald Trump was at one point considered the front-runner.

Trump’s inflammatory, offensive remarks about John McCain and immigrants from Mexico, and his conspiracy theories about China and President Obama’s status as a natural born citizen are naturally distasteful to moderate voters. And while Trump won’t be the Republican candidate for President, the idea that he was ever widely supported by Republican voters will hurt the reputation of the entire party.

This is to say nothing of how Trump alienates the Latin American community. By demonizing Latin American immigrants, Trump further damages the already poor relationship Republicans have with that demographic. An otherwise conservative immigrant, or child of immigrants, might find it very difficult to justify supporting a party that once supported Donald Trump.

Donald Trump’s impact on the election as a whole could be summarized as this: the presidential election being a contest between Jeb Bush and Hillary Clinton, with Clinton winning, is now slightly more likely than it was before his arrival. It was already the most likely single outcome, but his predilection for absorbing media attention and demonizing swing voters has hurt the chances of opposition candidates in the GOP winning the nomination, and the chances of any candidate from the GOP winning the general election.