Why Is Gold Becoming Scarcer 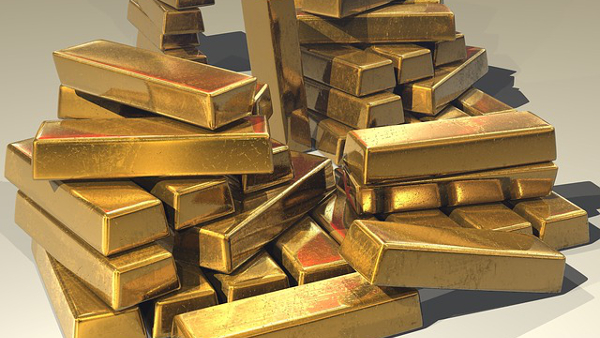 For quite a while, we have been talking about scarcity in gold. The cobasis for both October and December is positive. These contracts are backwardated. The cobasis for the February 2016 contract is not far from backwardation. The gold market is tight. Why? Let’s explore.

Part of the matter is that the price has fallen. The more the price drops, the more buyers tend to come out, and sellers go away.

We do not refer necessarily to the mines. Once the capital is sunk, a mining company is a price-taker. Management has little choice but to extract what it can, and hope the quantity produced times the profit available at a given gold price is enough to pay the fixed expenses such as debt service (well, if they don’t have a proper hedging program, which I wrote about here and here). Gold is often produced as a byproduct when mining for other metals, and this production depends on the profitability of the main metal in the ore.

For thousands of years, the market has absorbed all the output from every mine. If the quantity theory of money were true, gold would be a worthless commodity. Unlike everything else (except silver), the stocks of gold held by the people are a large multiple of annual production. There is no such thing as a glut in gold.

The lower price is not the only factor. The price of silver has fallen more than the price of gold. However, while there is backwardation in the September silver contract, there’s nothing even close in December much less 2016.

If it is controversial to say that gold doesn’t move, it’s even more so to say that the cause of the dollar’s decline is not its increasing quantity. The cause is its decreasing quality. In just the last 44 years since President Nixon’s gold default, the dollar fell from about 780mg. It is no coincidence that this dramatic drop occurred while the dollar went through several upheavals. The dollar was a gold redeemable currency, and then it was just a slice of the US government’s debt. Then the government spent more and more on less and less. After 2008, the dollar is partially a slice of mortgage debt, of unknown provenance.

It should be worth less! It represents less, claims less capital, and its likely repayment is dropping like a lead balloon.

That only leaves the question of why it has been rising for four years.

We think it boils down to confidence. Virtually everyone, from the blind faithful followers of the Fed, to its harshest critics, accept that the dollar is money. In other words, they are confident in the greatest confidence scheme ever.

In their view, gold goes up and down. This means: buy gold when it’s going up. And stay away, or even short it, when it’s going down. They have charts to tell them when this is occurring. And the fact is that gold has been going down for years. Few want to own a falling asset.

We use the metaphor of a Ouija Board frequently in discussing the gold market, or any market in which speculation is rampant. Everyone has a thumb on this little plastic piece, and it slides all over the board as if by magic. Well, it’s not magic. It’s just going wherever the mood of the group takes it.

The price of the dollar—of which the price of gold is just the inverse—goes here and there based on the mood of the crowd. Bigger crowd, same phenomenon.

Right now, the mainstream speculators who use futures see little reason to worry about the credit of the counter-parties of their dollar deposits. Stocks and real estate (especially the kind of real estate favored by those who can buy or sell gold futures) are going up.

They also see little reason to buy gold as a hedge to inflation. If prices aren’t rising—and just ask the shale oil producers about the price of crude oil—then there’s doubly no reason to buy gold. At least, in the mainstream view.

The basis and cobasis are extraordinarily sensitive metrics. There isn’t a wholesale divorce between paper gold and phyz. The spread for the December contract is currently one third of one percent annualized. Still, it shows a sentiment disparity between speculators and stackers—the rest of humanity—who own the metal itself.

We have a bizarre environment. The speculators’ favorite assets are relentlessly rising. At the same time, the quality of credit is falling across many sectors and geographies. So long as the stock market holds, then credit doesn’t matter to the speculator. However, when a wave of credit defaults occurs, it will suck the liquidity out of the markets, cause spending and hence revenues to drop, and reverse the direction of both stocks and the dollar.

We should emphasize that we are making educated guesses about confidence and speculator sentiment. We are filling in some blanks. It’s possible that the above is not 100% right. However, we are certain of four things.

One, the bid price on gold metal is higher than the ask price on gold futures. Two, this should not be able to occur, and that it does means the market is tight. Three, there is an ever-changing dynamic between hoarders, speculators, arbitragers, producers, and manufacturers. Four, the market price of gold is below the fundamental price (i.e. the dollar is overpriced).

Read on for the only accurate picture of the supply and demand conditions in the gold and silver markets, based on the basis and cobasis.

Next, this is a graph of the gold price measured in silver, otherwise known as the gold to silver ratio. The ratio moved down this week. It had been quite a bit lower, but moved up sharply on last Friday.

The price of the dollar dropped (i.e. the price of gold rose). However, the cobasis ended a hair higher than it was last week.

Let’s look at a new type of chart. It fits with our major themes: (A) the value of gold does not change, and indeed value is measured in gold the way length is measured in meters, (B) the market price of the dollar, which is just the inverse the commonly quoted price of gold, does move, and (C) the fundamental price of gold, which is just the inverse of the value of the dollar, moves independently of the market price.

We would love your feedback on this graph. It does not show price at all, but the discount (green) or premium (red, not shown as this has not occurred in gold in recent months) available on gold in the market.

A higher value, depicted as a deeper green, shows that gold is being sold at a larger discount to its value (i.e. the market will buy dollars at a premium). A value below zero indicates gold is selling at a premium.

The goal should be to accumulate gold at a discount, but avoid it when it’s trading at a premium (we always emphasize that one should NEVER NAKED SHORT A MONETARY METAL! You never know what some mad central banker will do while you are sleeping, and you could wake up to a 5% or 10% spike). 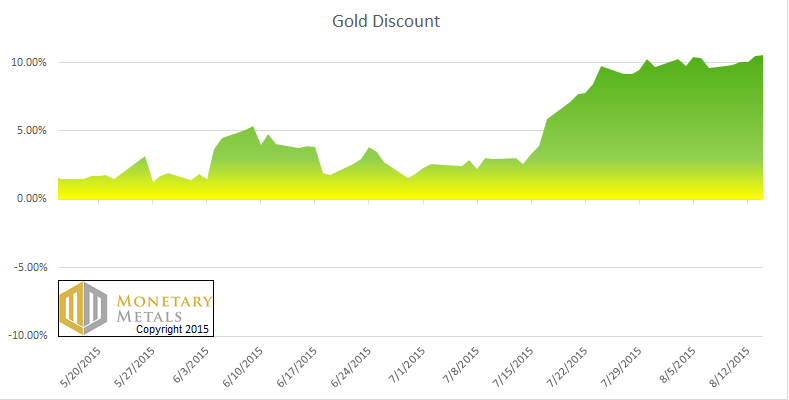 The price of silver went up. However, unlike in gold, the cobasis (i.e. scarcity) fell. 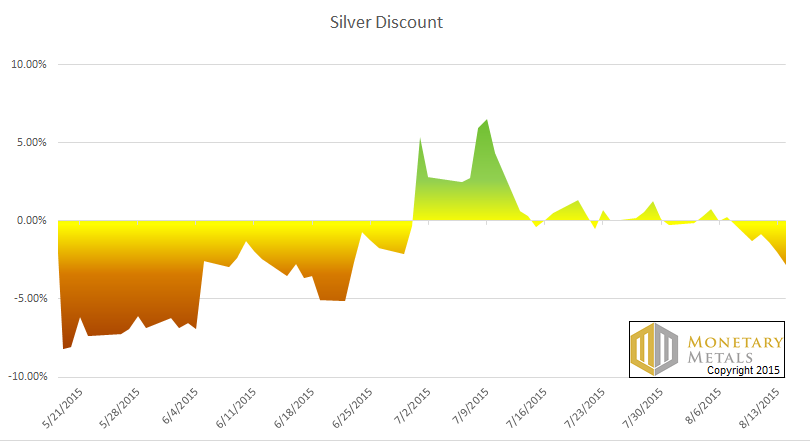 The silver discount chart looks radically different than the one for gold. There’s little bargain to be had—yes even at today’s price.

Silver is not only more volatile in its price, but also in its supply and demand fundamentals. Buyers came out for silver metal in the first few weeks of July, but then withdrew again. Now, with the rising price, it’s just a rising premium.

Gold measures the value of all things including the dollar and including silver. By contrast, the value of silver does go up and down. Not only are there speculators, but there are also industrial users. Not all silver that’s used in manufacturing is recycled. Therefore, a manufacturing downturn can press the value (and price) of silver.