A Nation of Laws or of Men? 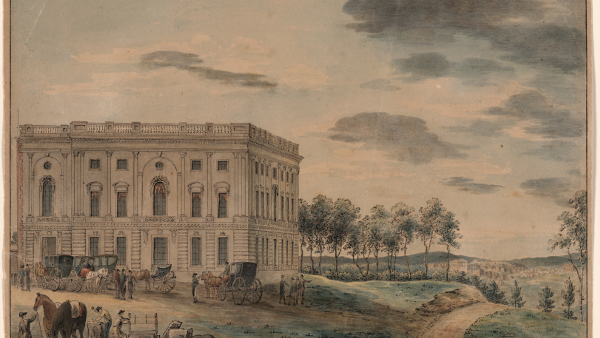 [T]he governing providence of God is presupposed. It is a doctrine clear from the necessary dependence of creatures, the uniform course of nature, and from special interpositions implied in the supposition of a revelation. God’s government is manifest in both the natural and moral world…dominion of the Sovereign of the universe be considered as guided by unerring wisdom and immutable holiness and goodness…This doctrine, which is the foundation of natural religion, is illustrated in revealed religion.[2]

Dana’s inference is of God’s dominion; that is God is King. His presupposition, in reference to the American Revolution and its manifestation in compact form of the Declaration of Independence, puts God squarely sovereign over all. America’s first President, Elias Boudinot, under the Congress of the Confederation, declared the goodness and justness of God’s “Divine Providence,” which Americans should hold “fear [obey] and reverence of his sacred majesty.”[3]

Reverend Chauncey Whittelsey, in 1778 during his sermon to the Connecticut General Assembly, would affirm the same stating the “great Characters, of godly and renowned Rules of God’s ancient people, from Moses to Nehemiah…[and]…a firm belief of the great principles of religion, and an habitual attention to God, was indisputably of unspeakable benefit.”[4]

A profound reference sited is we are a nation of laws, not of men. But what does this really mean? It means that the law is king (Lex Rex in Latin); and the whims of men are not. This is the very reason we do not have an earthly king and rejected (or separated from) England – specifically the king of England. The American colonists were not going to be adjudicated by his laws (whims); that is, they were not a nation (colonies at the time) of men. But being a nation of laws (Lex Rex) does not mean, singularly, that when a law is legislated (by the legislature) and adjudicated (by the judiciary) that this process makes a law valid in-and-of itself. While the process is important and critical to the legislating and adjudicating of good law, the process itself is not the final arbiter of the law. [The Founders, as well as our Forefathers], writes Dr. Mark David Hall, “firmly believed that God ordained moral standards, that legislation should be made in accordance with these standards, and that moral laws took precedence over human laws.”[5]

The Constitution establishes this process, and a good process; but it is not the end-all of the process. The final arbiter is God. Does a law, which properly followed the process, align with God’s Law? This specific question must be answered in all cases per our Compact – the Declaration (moral compact). Any law, in order to be valid and pass muster, must align with God’s Law.

Many make the claim that the Constitution is a “Godless” document. But is it? The Founders were re-creating the Federal government for very specific purposes. The two primary needs were actually articulated in the Declaration eleven years earlier; as to them shall seem most likely to effect their Safety and Happiness. The new Union was heavily struggling with economic issues compounded by monetary issues; as well as, ongoing concern if attacked by an external force, particularly Britain again, they would be too weak and uncoordinated to mount a capable defense. This drove the need for a Constitutional Convention. Therefore, it had limited purposes which would be enumerated in Article I, Section 8. Other matters remain with the States or local municipalities. As Professor Mark David Hall states, “Because the federal government was not to be concerned with these issues [religious, morals, and the like], they were not addressed in the Constitution. The First Amendment merely reinforced this understanding with respect to faith.”[6] The moral compact, the Declaration, remained as the Standard.

God’s Law (Natural Law: the Laws of Nature and of Nature’s God) is the final Standard to which all laws must be evaluated; again, per our Social Compact. God’s Laws predated our Union, and were established upon creation; therefore, in order to be a nation of laws, and not of men we must pose all laws against this Standard. If we do not, then we are not a nation of laws, but a nation of men.

Currently and tragically, we are more a nation of men, as the Federal government, and often State governments, operates today. It places America as an earthly kingdom – under the yoke of the whims of men (tyranny), not a Godly kingdom – under the yoke of liberty. Dr. Mark David Hall explains, when the Union was closer to the Founding era, “all but one Supreme Court Justice prior to John Marshall argued publicly that the Court could strike down an act of Congress if it violated natural law.”[7]

Liberty is a gift from God bestow upon His special creation; His children.   The only way to have a nation of liberty is under God’s Law. Again, this was acknowledged by the Declaration as the moral compact, with the Constitution as the structural compact; as best as humanly possible (which is never perfect), to allow the People to have a civil government which institutes a government as Godly as possible, in order to maintain their liberty. This reason is why the Founders consciously established a limited government; to protect our Fundamental Rights (rights given to us by God) and to mitigate tyranny.

Freedom, or liberty as it is articulated in America, is not only the manifestation of free will as Enlightenment philosopher John Locke expresses, but also must be embedded into the rule of law. Since the rule of law is Natural Law arising from legislative laws, and the rule of law must align with Natural Law, legislation must be measured against Natural Law to uphold it. Even with common law aligned legislation, its underpinning is Natural Law. During the history of the United States, until the mid to later part of the 20th century, collectivist leaning leaders understood this in principle. Even the popular British economist and political theorist Harold Laski, a socialist, understood that “Liberty in fact always means in practice liberty within law.”[9]

[1] Chauncey Whittelsey, May 14, 1778, “The Importance of Religion in the Civil Ruler, Considered,” A Sermon Preached before the General Assembly of the State of Connecticut at Hartford, On the Day of the Anniversary Election, (originally printed by New Haven, CT: Thomas and Samuel Green), copy printed 2015 by Sabin Americana, p. 10. . Pastor Whittelsey uses an Old English “s” which looks like the letter “f” without the crossbar, , but it was not used in this writing due to it not being available in the fonts used. So I have changed it where used to an “s.”

[4] Chauncey Whittelsey, May 14, 1778, “The Importance of Religion in the Civil Ruler, Considered,” A Sermon Preached before the General Assembly of the State of Connecticut at Hartford, On the Day of the Anniversary Election, (originally printed by New Haven, CT: Thomas and Samuel Green), copy printed 2015 by Sabin Americana, p. 8. . Pastor Whittelsey uses an Old English “s” which looks like the letter “f” without the crossbar, , but it was not used in this writing due to it not being available in the fonts used. So I have changed it where used to an “s.”