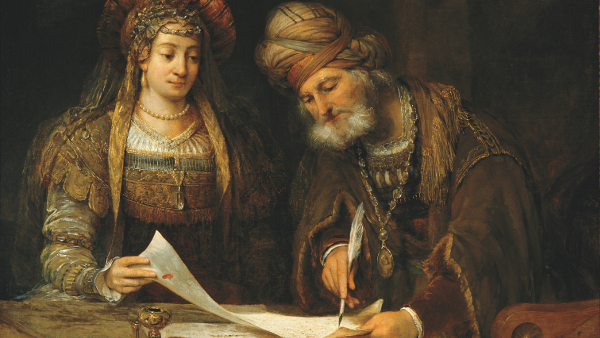 This week I will share with you one of my favorite stories in the entire Bible!  I know that this story will encourage you and help you in your PurposeQuest. While this week’s profile is from the life of Esther, it really isn’t about Esther. It’s about her cousin, Mordecai. As we learned last week, Mordecai raised Esther because her parents had died. Mordecai was Esther’s career mentor and because Esther obeyed his advice, she eventually won a beauty pageant and was chosen to be the new queen. Then we read these few verses about Mordecai himself:

During the time Mordecai was sitting at the king’s gate, Bigthana and Teresh, two of the king’s officers who guarded the doorway, became angry and conspired to assassinate King Xerxes. But Mordecai found out about the plot and told Queen Esther, who in turn reported it to the king, giving credit to Mordecai. And when the report was investigated and found to be true, the two officials were hanged on a gallows. All this was recorded in the book of the annals in the presence of the king (Esther 2:21-23).

You may be asking, “Why is this story one of your favorites?” My answer is that this represents only half of the story. Wait until you read the rest! But first, I want to make a few comments about the story’s first half. Mordecai had already done the king a favor by directing Esther to become queen. Then Mordecai did the king a second favor: He saved his life by uncovering and reporting the conspiracy to the king through Esther. When the report was investigated and found to be true, the conspirators were killed and the whole story recorded in the public record. The story could have ended there and almost seems like it does.

And that is how it may be with you. You have done good things that you knew were related to your purpose. You have helped other people, been faithful and still it doesn’t seem like you have received your promotion or breakthrough. You feel like that is the end of your life’s story so far. If you feel or have felt like that, read on!

Mordecai had an enemy named Haman, who hated Mordecai because he was a Jew and would now bow down and pay him honor. Haman was secretly plotting to wipe out Mordecai and the Jews but before he could hatch his plot, we read the following:

That night the king could not sleep; so he ordered the book of the chronicles, the record of his reign, to be brought in and read to him. It was found recorded there that Mordecai had exposed Bigthana and Teresh, two of the king’s officers who guarded the doorway, who had conspired to assassinate King Xerxes. “What honor and recognition has Mordecai received for this?” the king asked. “Nothing has been done for him,” his attendants answered. The king said, “Who is in the court?” Now Haman had just entered the outer court of the palace to speak to the king about hanging Mordecai on the gallows he had erected for him.

“Go at once,” the king commanded Haman. “Get the robe and the horse and do just as you have suggested for Mordecai the Jew, who sits at the king’s gate. Do not neglect anything you have recommended.” So Haman got the robe and the horse. He robed Mordecai, and led him on horseback through the city streets, proclaiming before him, “This is what is done for the man the king delights to honor!” (Esther 6:1-11).

I love this story! To me, this symbolizes the fact that God never forgets what you do for Him. I’ve told many audiences that God has a big book and a sharp pencil and He records everything that you do for Him.  In the fullness of time, often when you least expect it, God rewards and blesses you with honor, meaningful work, or significant purpose opportunities. What’s more, Mordecai could not have been blessed until after Esther became queen and had access to the king. Sometimes fulfilling your purpose is a matter of timing—there isn’t a need yet for who you are or what you do, or perhaps God hasn’t yet created the need that you were designed to fill, the problem that you were created to solve.

So take heart this week. God hasn’t forgotten you—He remembers everything that you have done and the preparation you have undertaken.  Put your trust in Him. And one night, when God can’t sleep, He will ask one of His heavenly messengers to read the book of good deeds and He will hear your name mentioned. He will then ask, “What have we done for my son or daughter to reward them?”  When the answer comes back, “Nothing,” then He will respond, “It is time to do something.” Who knows, this may be the week that God uses one of your enemies to be a source of blessing to you. I hope that this is the week when that happens, but if it isn’t, you know that is only a matter of time before that week comes. Keep on seeking and doing the good that you know you are to do. As you do, I pray that you will have a great week!