Gold Rally is Consistent With Fundamentals, Not Speculation 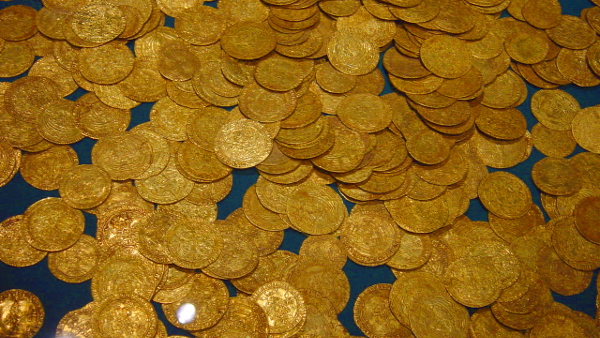 The prices of the metals moved up a bunch this week, with gold + $32 and silver +$0.55. We have seen some discussion of gold backwardation in the context of scarcity, and hence setting expectations of higher prices. That’s good, as the swings from contango to backwardation and back are the only way to understand changing supply and demand in the market.

You should be cautious about trading yesterday’s news. There was indeed backwardation in gold and silver. However, the cobasis is a sensitive indicator. It predicts the likely path of the price, but you should get an updated picture before buying based on an old reading after a sizeable price move.

In this Report, we’ll look at both metals bases, as well as their cobasis term structures. So read on…

Next, this is a graph of the gold price measured in silver, otherwise known as the gold to silver ratio. The ratio moved down again this week.

The price of the dollar fell dramatically (i.e. the price of gold rose), but the scarcity (i.e. cobasis) of gold dropped proportionally. As the price rises, there’s less buying of metal and more selling. That’s to be expected.

The fundamental price is up another ten or twelve bucks, still well over hundred bucks above the market price.

Let’s look at the gold cobasis out two years. We show both a week ago Friday Sep 11, and this Friday Sep 18.

Three things are noteworthy. One, these are small values. 60 basis points annualized on a contract that will deliver in just over a month is under a dollar per ounce. You need high quality realtime data to see this with any accuracy.

Two, with the higher price, backwardation mostly subsided. We had 60 basis points for the October contract and just under 30 for December. A week and $32 later, these numbers are reduced to 15 and 12 basis points respectively.

Three, the impact was felt in nearer contracts only. More than a year out, there’s no meaningful difference in the cobases.

It’s the same picture in silver. Price of the metal up, and scarcity down. The silver fundamental price didn’t budge. Silver is now just about fairly priced for current fundamentals.

There is an even bigger collapse than in gold. The December contract had a 70 bps backwardation on Sep 11. Now it’s 7 bps. January had a sizable backwardation, now the cobasis is -31bps.

Unlike in gold, the drop occurs across the entire term structure. This 55-cent increase in the silver price did more to alleviate silver scarcity than the 32-buck increase in the gold price. Maybe this shows silver’s dual nature as an industrial metal also (where rising price disincentives consumption, a factor not applicable to gold). Or maybe it’s just a reflection of the greater proportional move in silver of 3.8% vs. 2.9% in gold.