How to Filter the Speculative Noise Out of Gold Prices 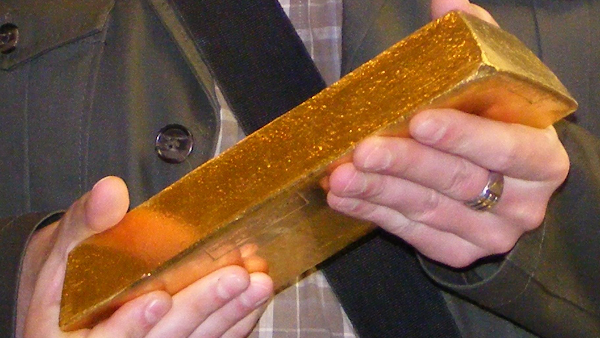 Last week, we called for a rising gold to silver ratio. On last Wednesday, this ratio hit nearly 80 before backing down a bit by the end of the week. It did not happen with a rising price of gold, rather it was a function of a falling silver price. On Wednesday, the silver price was down $1.22, or -8%. By the end of the week, it had rebounded along with the gold price.

We said we thought silver was overpriced at $15.31. Read on, for our take on $14.53. But first, let’s discuss the concept of the fundamental price.

We have been discussing fundamental prices of gold and silver, and contrasting them every week with the market price. This is how we have known that the price of silver would fall since the inception of this Report a few years ago (and prior to that). This is why we thought that the gold to silver ratio would likely hit 80 or more (as it did on August 26). It should be noted that most others were expecting silver to outperform gold.

The fundamental price is not a timing mechanism, but a valuation metric. It tells us which way supply and demand forces are applying pressure to the price. Sometimes, it is telling us the price is far from its fundamental levels. We recall the summer of 2013 when there was a ferocious rally in the price of silver from $19 to $25. That rally flew in the face of the fundamental valuation of the metal. We knew that the $25 level would not hold, despite the charts and the excited cheering from the silver bugs.

The price of silver has not been up to that level since.

This is a bad news, good news scenario. The bad is that the price can sometimes move counter to the fundamentals. Most people trade based on charts. They are looking for certain patterns to tell them when to buy or sell. Others—especially in gold and silver—trade based on rumors and often conspiracies. We recall more than a little such chatter in the summer of 2013.

The good news is that these episodes where price deviates from value provide trading opportunities. The farther the price gets away, and the longer it stays there, the more likely that there will be a sharp move opposite to what most market participants expect.

This is why you always keep some power dry (and one more reason never to naked short a monetary metal).

Here is a graph showing two weeks in July that had a significant market price move. We have overlaid the fundamental price.

The fundamental price is less volatile than the market price. This makes sense, as the market price can bounce around like a pinball when speculators flip from manic to depressive to manic again. The supply and demand fundamentals don’t usually shift so rapidly, except when something real changes (a Fed official jawboning in TV does not count as something real).

So what is it?

The fundamental price is the output of a Monetary Metals algorithm. Before he studied Austrian economics, Keith Weiner was a software developer and architect. He married the engineer’s data-driven approach to his economist’s understanding of the gold and silver markets. The result is a model that combines the best aspects of econometrics and an Austrian view of gold.

Econometrics applies math, statistical methods, and computer science to economic data. That describes the Monetary Metals fundamental price algorithm perfectly. However, the article goes on to describe the quest for correlation, describing this as the “concurrent development of theory and observation.”

We depart from conventional econometrics there. There’s a well-known logical fallacy—at least outside econometrics—known as correlation does not imply causation. We don’t look to the data to develop our theories.

As regular readers know, we have our theory. A rising basis indicates rising abundance, and a rising cobasis indicates rising scarcity. This theory comes from looking at a futures market as a warehousing market (discussed here). If the price of a futures contract is bid up, then the basis increases. This is a signal to the warehouseman to carry more of the commodity—buy spot, sell future. The market only sends this signal when the good is abundant.

Scarce goods, by contrast, are pulled out of carry. In scarcity conditions, the price of the good in the spot market is rising. This signals the warehouseman to sell spot and buy a future. He ends up with the same position, plus a free profit. The reason why such a risk-free profit is offered by the market is that few people have the good, thus scarcity.

It is very Austrian, going back to the founder of the school Carl Menger, to focus on spreads rather than prices. Most analysts and traders look at price charts. We look at (and publish) spread charts, the basis and cobasis.

Another very Austrian idea is to look at change at the margin. In our case, we are very interested in how the basis and cobasis move as price moves. Every week, we print graphs showing the price of the dollar in ounces of gold (which is the inverse of the gold price) and the bases. How the price moves in relation to moves in the basis and cobasis tells us whether there is a fundamental change in the value of gold or whether it is just speculators repositioning.

A key part of this theory is that speculators or hoarders are the marginal buyers or sellers of spot gold and futures gold, respectively. Other key players, such as miners (net sellers), manufacturers (hedging their inventory) and industrial users (net buyers), do not generally make big changes to their positions–operational and profit consistency are their prime motivations.

Hoarders in general, are people who buy metal intending to keep it for the long term, or at least a while. Their trading is tempered by the fact that buying physical gold, unlike futures, can involve significant delivery and storage costs.

So we measure the difference between the behavior of these two groups: speculators and hoarders. Our calculated fundamental price backs out the price impact of the speculator, to show us a naked picture of the balance of supply and demand.

Unlike those who trade on rumors, we are using objective data available by observing the market. Unlike chartists, we are using spreads rather than raw prices. Unlike analysts who look at Indian or Chinese imports, we are looking at data that captures the whole market, not just the move from one corner of the market to another.

The model is the culmination of 6 years of Weiner’s study of economics and gold, and built with the knowledge developed in two decades of his previous career as a coder, and then building a software company (DiamondWare, which he sold to Nortel Networks in 2008). In his software days, he was heavily involved in signal processing and the separation of information and noise in communications. That is what Monetary Metals’ Fundamental Price is all about–pulling out the speculative noise from the price signal to reveal information about the fundamentals of supply and demand.

Now here is the graph of the metals’ prices.

Next, this is a graph of the gold price measured in silver, otherwise known as the gold to silver ratio. The ratio moved up sharply again this week.

The fundamental price is up a few bucks from last week.

One could certainly do worse than to pick up gold with this kind of discount on offer, should one perhaps be in the market for the metal.

The price of the dollar rose from 2.03g to 2.14g silver (i.e. the price of silver, as measured in dollars, fell). As you can see, we now have backwardation in the December silver contract. Yes, it’s above that of the December gold cobasis (though beyond that month, the silver term structure is different from gold—not so bullish).

The silver fundamental price is now above the market. They key question is: will this state hold?