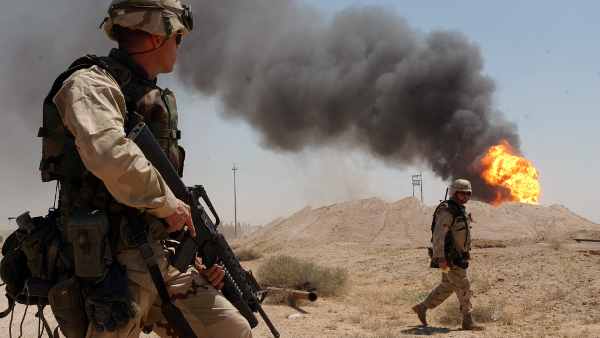 On the anniversary of 9/11, there was an attack aimed at the financial infrastructure of the country. It’s important that we don’t forget the fight going on in Iraq. It’s the single biggest threat to the U.S. economy, as I mentioned to David Williams on our daily webinar at RansomNotes.tv.

Turns out that maybe, given what happened to Gaddafi, Mubarak, and Assad, that perhaps the Bush administration was a bit farsighted in seeing the Islamist threat as represented by Al Qaeda as part of a larger threat of Islamic populism.

Turns out too, since the Defense Department is now giving out Purple Hearts to soldiers who were exposed to Saddam’s WMDs, that oh yeah, there were chemical weapons in Iraq— including sarin nerve gas— which could now be in the hands of insurgents like ISIS.

Ironically, according to Military.com, it was a New York Times investigative story that prompted the admission from the Defense Department of the exposure and a search for some soldiers who may have been harmed by chemical agents.

“The search is prompted by a New York Times report last October,” says Military.com, “that American troops were exposed to chemical agents and even sarin gas during the war. The Army almost immediately began reviewing health surveys filled out by troops returning from the combat theater, and in November, the Army identified some 629 soldiers who may have been exposed.”

The article says “about 5,000 chemical warheads, shells or aviation bombs were found by U.S. troops during the course of the Iraq War.” That’s quite literally tons of WMDs that were somehow missed by the mainstream media.

So, let’s be honest now: The Iraq war was a just war, fought in a poor way, but eventually won by the United States. And then the fruits of that victory were tossed away by Obama’s bungling.

He was handed a stable government but withdrew US troops precipitately, troops which were always necessary to maintain peace as the Sunnis and Shites worked out their political differences.

Imagine how different the Middle East would look like if there were still 50,000 U.S. troops on the borders of Iran or Syria.

And because Obama’s handled the Middle East so poorly, he has destabilized the region in North Africa, Syria, the Horn and Mesopotamia.

He was wrong in Egypt, Libya, Syria and Iraq.

“The most ironic aspect of the fight in western Iraq is its connection to the fight in Syria,” one intel analyst told me back in January of 2014 as ISIS got rolling. “As a result of that the US is on both sides of the fight, supporting the Islamists and the Iraqi government. That is also what is going on in Afghanistan, but the mechanism is slightly different. The fighters in Anbar are part of the same group that the US had supported in Syria. They have seized US arms and supplies from warehouses that were meant for the more tolerant Syrian Muslim fighters and they appear to be showing up in Iraq.”

And make no mistake, the other Arab regimes are lining up against the United States, helping to finance the rebels now because they understand that about the only people Obama is interested in fighting to the finish are Catholic nuns who don’t want to pay for birth control medicines.

“From day one, the president has sent a very clear message that that’s not a fight he or his Administration have the stomach for,” said Tony Marsh about a U.S. presence in Iraq. Marsh is a contractor who helped with elections in Iraq. “[Islamic fundamentalists have] been biding time when they can finally emerge, unopposed by U.S. forces, to rebuild their networks and reaffirm their fight against the West. We see them doing that now in Iraq, Syria, Afghanistan and large parts of Africa.”

Except for the nuns. Obama was really impressive forcing the nuns to violate their conscience.

How do liberals look at themselves in the eye after supporting a jerk like Obama? Or Clinton or Kerry, or Colin Powell, all of whom knew American service members were exposed to WMDs but they remained silent?

I’m running out of excuses for my liberal friends who don’t arms themselves with torches and pitchforks against their leaders.

So the IRS, NSA, and Benghazi scandals they shrug at; they can’t be bothered when cops get killed, but god forbid (small “g” god because that’s the only kind liberals believe in) that nuns object to paying for birth control.

There’s a great story in Robert Middlekauff’s book The Glorious Cause about how when the loyalist Governor of Massachusetts, Thomas Hutchinson, supported the detested Stamp Act— the act that went a long way towards starting the Revolution— a group of patriots took down his house, brick by brick, almost to the foundations.

If the politicos don’t get it in 2016, I guess there is always that.

Just ask the people in Iraq how that works.